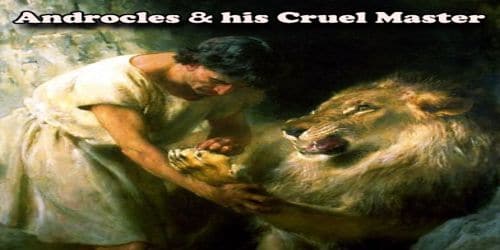 Androcles and His Cruel Master

Once upon a time, there lived a young man named Androcles. He was caught by a slave merchant who sold him to a rich man in another country. His master was very rude and cruel. He used to behave cruelly with him. He often used to inflict heavy torture on him. It was unbearable for him. To escape torture, one day he fled away from his master’s house. He took shelter in a remote cave in a deep forest.

A lion lived in the cave. In the evening the lion entered the cave. The lion seemed wounded as he was groaning. Androcles came near the lion. He took the lion’s paw in his hand and removed a big thorn from it. The lion was relieved of his pain.