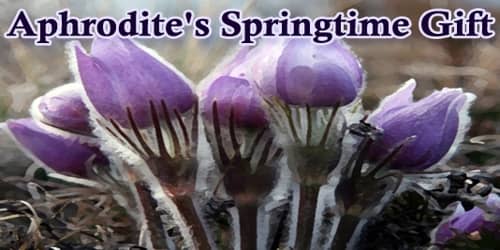 Long ago, the goddess of love and beauty, Aphrodite, cast a spell upon a young woman who had angered her, finally turning her into a myrrh tree.

Months later, the trunk of the tree burst open and out of it came a baby boy, Adonis.

The boy instantly charmed Aphrodite, for he was a beautiful child. At first, she wanted nothing more than to care for Adonis, but she soon grew weary of the task, and so, as if placing him into a cradle, she set him inside a casket and took it to Persephone, goddess of the underworld, asking her to please look after the boy.

When Aphrodite was gone, Persephone opened the casket. When she saw the boy, she too was instantly charmed. She lifted him out of the casket and determined to raise him.

But while Adonis was still a boy, Aphrodite returned for him. Persephone refused to give him up. “Adonis is mining now,” she told the fuming goddess. “I will never let him go.”

Distraught, Aphrodite turned for help to the ruler of the cosmos, Zeus. Only he could determine what was just in this matter. Who should raise the beautiful boy?

Adonis elected to spend the last third of the year with Aphrodite, for he was drawn to the pleasures of the Earth, to the forests and to animals, and especially to hunting.

From that day on, Aphrodite, captivated by Adonis, neglected her other children. More and more she absented herself from Olympus, home of the gods so that she could spend time in the young man’s company. Sometimes in order to wander through the forest after him, she dressed as Artemis, goddess of the hunt. But on these sojourns, Aphrodite recognized the dangers that this forest held and the terrors that lay in the hunt.

“Adonis,” she cautioned him, “be brave to those who are gentle but do not try bravery in the face of those who are stronger than you. Please, for my sake, do not expose yourself to danger.”

Gazing at the creatures of the forest, Aphrodite saw dangers for Adonis everywhere. Nature, she saw, had armed the beasts with weapons, with teeth and claws and with the strength of a dozen men. Even her strong Adonis would be ill-equipped to face these beasts. Again and again, she warned him to take care.

One day, after she had given him her sternest warnings, she mounted her chariot drawn by swans and off into the air she flew.

When she was gone, proud Adonis could not resist the hunt. His hounds were howling, and so into the forest, he followed them. There he saw that his dogs had roused a wild boar from its lair, and he set off on a chase.

Casting his spear, he pierced the boar’s side, and the creature fell to the ground. Adonis ran toward him, but the boar managed to use his teeth to tear the spear out of his body. When Adonis was near, the beast lunged at him, burying his tusks in the hunter’s side. Then he left him to die upon the forest floor.

Aphrodite, nearing Olympus, heard a shriek rise up through the heavens. Recognizing the voice of Adonis, she turned her chariot back to Earth, racing like the wind. As she drew close, she saw the lifeless body below. It was her sweet young Adonis!

When she reached him, she wept as if the world were ending. “No, no,” the goddess screamed and tore at her hair. She cried to the Fates, “My grief will never end,” as she knelt over his body.

And then she knew what she must do. “Every year, everywhere, people will remember my sweet Adonis.”

And as she said these words, she sprinkled nectar on his blood. The blood and nectar mingled, and bubbles swirled on the ground, and moments later a flower of the richest, reddest hue rose from that spot.

Ever since that day, every year in springtime the anemone, or windflower, as it is known, rises from the ground. The wind blows its blossoms open, and later blows its petals away, and every year those blooming red anemones symbolize the return to Earth of life and love and commemorate the death of the beautiful young Adonis.