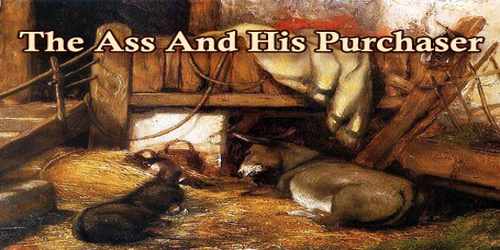 The Ass And His Purchaser

A man who wanted to buy an Ass went to market, and, coming across a likely-looking beast, arranged with the owner that he should be allowed to take him home on trial to see what he was like. When he reached home, he put him into his stable along with the other asses.

The newcomer took a look round, and immediately went and chose a place next to the laziest and greediest beast in the stable.

When the master saw this he put a halter on him at once, and led him off and handed him over to his owner again. The latter was a good deal surprised to see him back so soon, and said, “Why, do you mean to say you have tested him already?” “I don’t want to put him through any more tests,” replied the other: “I could see what sort of beast he is from the companion he chose for himself.”

Moral of the story: A man is known by the company he keeps.