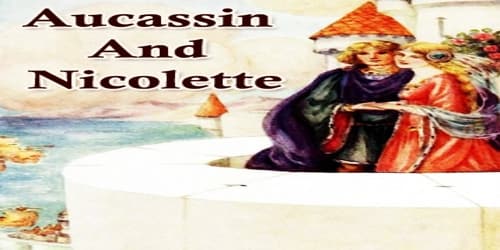 Long ago, in the city of Beaucaire, in Provence, there was a young knight named Aucassin, son of the Count of Beaucaire, and a slave-girl whose name was Nicolette. Nicolette had been captured in Spain and brought to Beaucaire to serve in the count’s palace. In time, Aucassin and Nicolette fell in love with each other.

Aucassin begged his father to allow him to marry the lovely girl, but the count refused. “My son will never marry a slave girl from Spain,” he said angrily. The Spanish were his enemies. But Aucassin pleaded, promising his father he would serve him well if only he could marry his beloved. The count still refused.

At last, Nicolette and Aucassin ran away together. They spent that summer in the forest, surrounded by wild roses and ferns, serenaded by the songbirds. They lived on nuts and berries, and they were as happy as any couple has ever been. But as the summer faded, they knew they must find a new home.

When autumn came, they walked to the seashore. There they boarded a merchant ship bound for a faraway land.

Aucassin and Nicolette thought they were safe at last, but on the third day of their journey, the sea grew suddenly calm. The boat bobbed in eerie stillness for many hours. The sailors fretted. “A sudden calm means a storm is brewing,” they said.

And they were right. Out of the stillness came a terrible wind that tossed the ship and drove it far from its course. Soon they were swirling through forbidding, unknown waters.

Finally, the ship crashed on an island. The people of the island ran to the ship, welcoming the sailors and comforting them. “Welcome to Torelore,” the people said.

Aucassin and Nicolette smiled at each other. They believed they had reached a perfect place.

“This is a good land,” Nicolette said, and Aucassin agreed, but he was troubled by the way the surrounding countries took advantage of the peace-loving islanders. Enemies often attacked. One night, while Aucassin and Nicolette were fast asleep, a band of pirates sneaked onshore and dragged away Nicolette, forcing her onto their ship. Aucassin was manacled and dragged to another ship.

As their ships set sail, Aucassin cried to his beloved, and she wept for him. As their ships sailed side by side, a storm struck, and the two ships were separated.

After many hours, Aucassin’s ship hit rocks. Aucassin survived the crash. When he awoke, he saw that he had landed back in Beaucaire.

His rescuers celebrated his return, for his father had died and they were in need of a leader. Aucassin became Count of Beaucaire. He governed kindly, having learned much from the people of Torelore. Still, he was a sad man, for he grieved for his beloved Nicolette.

Nicolette’s ship had sailed back to Spain, the land of her birth. When her father saw his daughter, returned to him at last, he lavished her with love and gifts. She lived in luxury in her father’s home. But she, too, was sad. She could think only of Aucassin.

“Wealth is nothing without love,” she said, but her father laughed and forbade her to travel to his enemy’s land.

She sat with the court musicians and learned to play the viol. She sang a melancholy song, the tale of Torelore and of her sweetheart. One night she decided what she must do. She stole out of her father’s house dressed as a minstrel and hid aboard a northbound ship heading for Provence.

The ship landed safely, and Nicolette made her way to Aucassin’s castle. She did not announce herself. Instead, she sat on the steps outside Aucassin’s chamber and began to play her sad song.

When Aucassin heard the song, his heart swelled. He ran to the steps, and when he saw the minstrel, he stopped and listened. He bent down and stared into the minstrel’s face. “Nicolette, it is you,” he cried with joy.

The very next day they renewed their vows to each other and were together at last, in peace and harmony. The people of Beaucaire could see that these two were meant to spend their lives together, and so everyone celebrated their joy and their courage, and afterward, minstrels sang the story of Aucassin and Nicolette.