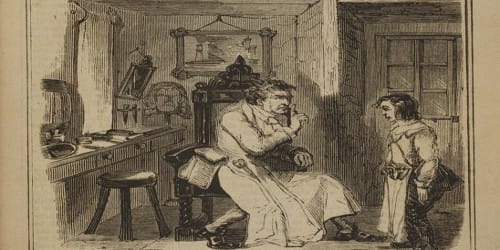 The Baker’s String (A Jewish Tale)

Herschel the baker lived in the village of Chelm, and like all his fellow townspeople, he was more than he appeared to be. Herschel was a wonderful baker, and also a philosopher. He often wondered and asked, “Who am I?” It was a philosophical question the men often discussed, especially when they gathered at the public baths.

Herschel knew one thing above all else: He loved to bake. He loved the heavenly aroma of his challah bread, the sweet scent of sugary cookies and rich almond cakes. On holidays, he beamed as his customers ordered flaky pastries. He would clap his floury hands upon his apron and proclaim, “There is nothing finer than being Herschel the baker.” Bending his knees, he lifted fresh mandelbrot from a tray and gave these away to the children. “Have another,” he would offer happily, for nothing gave him more pleasure than filling the stomachs of the villagers with delicious baked goods.

One day, as the men gathered in the baths, one of them said, “I’ve long wondered what it is that makes us who we are.”

Moshe nodded solemnly. “All men are created alike, or so the Bible says,” he said.

“Yes,” said Abraham, “and so, perhaps, it is only our clothing that sets us apart from each other.”

Herschel looked around the room. Each man wore only a simple white towel around his waist. Silently, Herschel, the baker began to worry. He feared he might one day become lost in the baths. He might, without his floury apron, be mistaken for the shoemaker. If that happened, he would have to spend the rest of his days at a cobbler’s bench.

After a while, he became so afraid of the possibility of losing his identity that he decided he must find some way to avoid it. To make clear who he was, Herschel tied a red string around his right ankle. “This is proof that I am Herschel the baker,” he said, and his heart swelled with joy. Now, even in the baths, he would remain Herschel the baker. Every time he went to the baths, he quickly tied a string around his ankle before he took off his clothes. “There’s my proof,” he would think, smiling at the bright red string.

One day a stranger moved to Chelm. The stranger wanted to behave properly, and so he paid careful attention to the customs of the villagers. That first day, he happened to stop at the baths, and when he entered, he saw Herschel the baker, a towel around his waist, a bright red string tied tightly around his ankle.

The stranger rubbed his chin and thought, “This is a strange custom, but it seems this is what the people of Chelm do in the baths.”

The following Friday afternoon, Herschel prepared for his Sabbath bath. He carefully tied a string around his ankle and walked to the baths. He enjoyed his bath tremendously and stayed for a long time, letting the steam warm and comfort him. When he was finished, he walked into the dressing room, feeling clean and good. He pinched himself, just to make sure it was he, Herschel the baker, who was feeling so wonderful, and then he looked down to check for his string. It was gone!

Herschel began to worry, his heart pounding. Worse, when he looked up, he saw a stranger wearing a towel around his waist and a bright red string around his ankle.

Sweat poured from Herschel’s head and he thought he might faint. “If that man is me,” he thought, “then who am I?” Shaking with panic, he stepped toward the stranger. “Friend,” he said, “I have never seen you before, but I know who you are. You are me, or you are who I thought I was. You are Herschel the baker, for only Herschel the baker wears a bright red string around his ankle when he goes to the baths. But tell me, if you would, good sir, if you are Herschel the baker, who am I? Please tell me, for I must know what it is I will be doing for the rest of my life!”