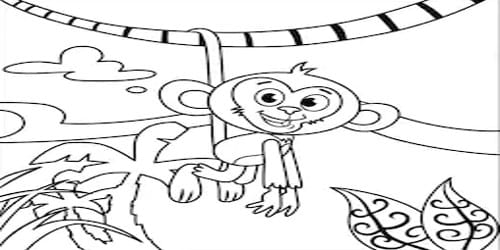 The Banana Tree Game (A Story From Brazil)

Once upon a time, an old woman lived in the middle of a marvelous garden. She loved her flowers and bushes, but best of all she loved her banana trees. Those trees grew so tall and were so filled with fruit, the woman was never hungry.

She did have one problem, though. Because she was a small woman, she could never reach the bananas at the top of the trees. So one day, as she was walking through the woods, she came upon a family of monkeys and had an idea.

“Big Monkey,” she called to the biggest monkey of all. “If you will come to my garden and gather my bananas for me, I’ll give you half of them to eat.”

Big Monkey thought that sounded fine, and so he skipped back home with the old woman. When he saw those tall banana trees, he grinned a big grin and shimmied to the top of the tallest one. He swung from tree to tree, gathering all the bananas he could.

He shimmied back down to the ground and began to sort the bananas. He left the old woman all the tiny, soft bananas and took the big, fat bananas home with him.

Well, when the old woman saw those soft, little bananas she was angry. She stomped into her house and thought about how she would punish Big Monkey.

As evening came on, she lighted a beeswax candle and had a brilliant idea. She began to gather all the candles she could find. Then she lighted every single candle and gathered all the melting wax into a tub. When that tub was full of wax, the old woman sculpted a little man out of the wax. She was an artistic woman, and her wax man looked nearly real.

At dawn Big Monkey came to call, hoping to gather another bunch of bananas. When he saw the wax man with a big basket of bananas on his head, Big Monkey bowed politely.

“Good morning, sir! Mmm, mmm, those bananas of yours look tasty. Could I have one, please?”

The wax man sat very still and said nothing. Of course, he couldn’t speak, for he was made of wax.

Big Monkey stepped closer. “Why won’t you answer me?” he asked. He began to feel angry, for he did not like to be ignored. “Just one banana?” he asked.

Still, the wax man said nothing.

Now Big Monkey was really angry. “If you don’t give me a banana, I’ll push you over and take all your bananas,” he warned, but the wax man sat still and silent. Big Monkey reached out and struck his arm.

The sun had begun to rise, and the wax man was growing softer. The moment Big Monkey touched the wax man, his hand stuck to his arm.

“Let go of my hand!” Big Monkey cried as he pulled and tugged and pulled some more. “And give me a banana or I’ll push you right over with my other hand. It’s very strong.”

The wax man did not let go and didn’t answer, and so Big Monkey pushed again with his other hand. It stuck too.

“I’m warning you, sir, that if you don’t let me go and give me a banana, you’ll be very, very sorry,” he said and lifted his other foot to give a kick. Naturally, his other foot stuck fast.

Now Big Monkey wailed. “Give me my feet and hands or I’ll, I’ll …” and he butted the wax man with his head as hard as he could.

Big Monkey was completely stuck. “Help me!” he cried, and soon the garden was filled with monkeys. Every one of Big Monkey’s family came, and all his friends came too.

When they saw Big Monkey stuck to the wax man, they didn’t know what to do. They all stood and stared and shrugged as he continued to shriek.

Meanwhile, the sun was rising higher and higher.

Suddenly Little Monkey looked up and grinned. “I know what to do,” he cried with glee and gathered the monkeys together to tell them his plan.

“Yahoo,” the monkeys cried and climbed to the top of the tallest tree. They made a pyramid of monkeys, with the littlest monkey on the very top.

Little Monkey stood up and looked up at the sky. “Sun! We need your help! Come out and shine as brightly as you can!”

All the monkeys cheered! They celebrated by gathering every single banana in the old woman’s garden.

Well, when the little old woman saw what was happening in her garden, she decided she could no longer protect her banana trees, so she moved away and left them to the monkeys.

And from that day to this, all monkeys believe they own all the bananas.