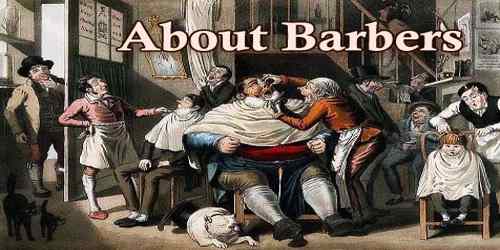 “I got shaved this morning as usual. A man approached the door from Jones Street as I approached it from Main a thing that always happens. I hurried up, but it was of no use; he entered the door one little step ahead of me, and I followed in on his heels and saw him take the only vacant chair, the one presided over by the best barber. It always happens so. I sat down, hoping that I might fall heir to the chair belonging to the better of the remaining two barbers, for he had already begun combing his man’s hair, while his comrade was not yet quite done rubbing up and oiling his customer’s locks. I watched the probabilities with strong interest.”

When I saw that No. 2 was gaining on No. 1 my interest grew to solicitude. When No. 1 stopped a moment to make change on a bath ticket for a new-comer, and lost ground in the race, my solicitude rose to anxiety. When No. 1 caught up again, and both he and his comrade were pulling the towels away and brushing the powder from their customers’ cheeks, and it was about an even thing which one would say “Next!” first, my very breath stood still with the suspense.

But when at the culminating moment No. 1 stopped to pass a comb a couple of times through his customer’s eyebrows, I saw that he had lost the race by a single instant, and I rose indignant and quitted the shop, to keep from falling into the hands of No. 2; for I have none of that enviable firmness that enables a man to look calmly into the eyes of a waiting barber and tell him he will wait for his fellow-barber’s chair.

I stayed out fifteen minutes, and then went back, hoping for better luck. Of course all the chairs were occupied now, and four men sat waiting, silent, unsociable, distraught, and looking bored, as men always do who are waiting their turn in a barber’s shop. I sat down in one of the iron-armed compartments of an old sofa, and put in the time far a while reading the framed advertisements of all sorts of quack nostrums for dyeing and coloring the hair.

Then I read the greasy names on the private bayrum bottles; read the names and noted the numbers on the private shaving-cups in the pigeonholes; studied the stained and damaged cheap prints on the walls, of battles, early Presidents, and voluptuous recumbent sultanas, and the tiresome and everlasting young girl putting her grandfather’s spectacles on; execrated in my heart the cheerful canary and the distracting parrot that few barbers’ shops are without. Finally, I searched out the least dilapidated of last year’s illustrated papers that littered the foul center-table, and conned their unjustifiable misrepresentations of old forgotten events.

At last my turn came. A voice said “Next!” and I surrendered to No. 2, of course. It always happens so. I said meekly that I was in a hurry, and it affected him as strongly as if he had never heard it. He shoved up my head, and put a napkin under it. He plowed his fingers into my collar and fixed a towel there. He explored my hair with his claws and suggested that it needed trimming. I said I did not want it trimmed. He explored again and said it was pretty long for the present style better have a little taken off; it needed it behind especially. I said I had had it cut only a week before. He yearned over it reflectively a moment, and then asked with a disparaging manner, who cut it? I came back at him promptly with a “You did!” I had him there.

Then he fell to stirring up his lather and regarding himself in the glass, stopping now and then to get close and examine his chin critically or inspect a pimple. Then he lathered one side of my face thoroughly, and was about to lather the other, when a dog-fight attracted his attention, and he ran to the window and stayed and saw it out, losing two shillings on the result in bets with the other barbers, a thing which gave me great satisfaction. He finished lathering, and then began to rub in the suds with his hand.

He now began to sharpen his razor on an old suspender, and was delayed a good deal on account of a controversy about a cheap masquerade ball he had figured at the night before, in red cambric and bogus ermine, as some kind of a king. He was so gratified with being chaffed about some damsel whom he had smitten with his charms that he used every means to continue the controversy by pretending to be annoyed at the chaffings of his fellows. This matter begot more surveyings of himself in the glass, and he put down his razor and brushed his hair with elaborate care, plastering an inverted arch of it down on his forehead, accomplishing an accurate “Part” behind, and brushing the two wings forward over his ears with nice exactness. In the mean time the lather was drying on my face, and apparently eating into my vitals.

Now he began to shave, digging his fingers into my countenance to stretch the skin and bundling and tumbling my head this way and that as convenience in shaving demanded. As long as he was on the tough sides of my face I did not suffer; but when he began to rake, and rip, and tug at my chin, the tears came. He now made a handle of my nose, to assist him shaving the corners of my upper lip, and it was by this bit of circumstantial evidence that I discovered that a part of his duties in the shop was to clean the kerosene-lamps. I had often wondered in an indolent way whether the barbers did that, or whether it was the boss.

About this time I was amusing myself trying to guess where he would be most likely to cut me this time, but he got ahead of me, and sliced me on the end of the chin before I had got my mind made up. He immediately sharpened his razor he might have done it before. I do not like a close shave, and would not let him go over me a second time. I tried to get him to put up his razor, dreading that he would make for the side of my chin, my pet tender spot, a place which a razor cannot touch twice without making trouble; but he said he only wanted to just smooth off one little roughness, and in the same moment he slipped his razor along the forbidden ground, and the dreaded pimple-signs of a close shave rose up smarting and answered to the call.

Next he poked bay ruin into the cut place with his towel, then choked the wound with powdered starch, then soaked it with bay rum again, and would have gone on soaking and powdering it forevermore, no doubt, if I had not rebelled and begged off. He powdered my whole face now, straightened me up, and began to plow my hair thoughtfully with his hands. Then he suggested a shampoo, and said my hair needed it badly, very badly. I observed that I shampooed it myself very thoroughly in the bath yesterday. I “had him” again. He next recommended some of “Smith’s Hair Glorifier,” and offered to sell me a bottle. I declined. He praised the new perfume, “Jones’s Delight of the Toilet,” and proposed to sell me some of that. I declined again. He tendered me a tooth-wash atrocity of his own invention, and when I declined offered to trade knives with me.

He returned to business after the miscarriage of this last enterprise, sprinkled me all over, legs and all, greased my hair in defiance of my protest against it, rubbed and scrubbed a good deal of it out by the roots, and combed and brushed the rest, parting it behind, and plastering the eternal inverted arch of hair down on my forehead, and then, while combing my scant eyebrows and defiling them with pomade, strung out an account of the achievements of a six-ounce black-and-tan terrier of his till I heard the whistles blow for noon, and knew I was five minutes too late for the train. Then he snatched away the towel, brushed it lightly about my face, passed his comb through my eyebrows once more, and gaily sang out “Next!”

This barber fell down and died of apoplexy two hours later. I am waiting over a day for my revenge I am going to attend his funeral.