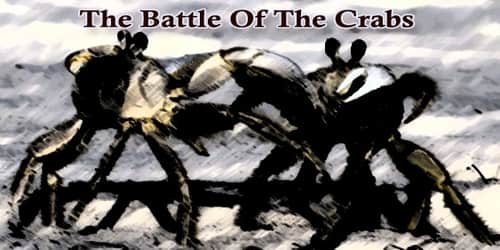 The Battle Of The Crabs

Long long ago, a shrimp was walking cheerfully on a beach when it saw a dozen land crabs crawling towards the sea. Curious, it went towards the crabs to ask what so many of them were doing together.

“We are going to fight the waves.” replied the head of the crabs. “They sing so loudly all the time that we cannot sleep well at night.”

“I don’t think you will win the battle,” said the shrimp. “The waves are so strong, and look at you. Your legs are so weak that your bodies bend almost to the ground when you walk. How can you hope to keep them down when you cannot even keep yourselves up?”

It laughed at the crabs. But the crabs became angry and pinned it down to the ground.

“How dare you insult us?” they shouted. “Now you too must help us in our fight.”

What could the poor shrimp possibly do? It promised to help the crabs in their battle.

When they reached the shore, the crabs looked at the shrimp and said: “Your face is turned the wrong way, friend shrimp. How can you fight your enemy when you cannot even look at him?”

And they laughed at the shrimp, for crabs are much like humans, who think they are the only ones who are right.

But as they were laughing, the shrimp saw a huge wave coming, and it ran away as fast as it could. The crabs, who were all looking towards the shore, did not see it and were killed.

When their husbands did not come home even after a long time, the wives of the dead crabs thought that the battle must be a long one, and decided to go down and help their husbands. But as they reached the shore and entered the water to look for their husbands, the waves killed them too. Their children were left living alone.

When the little crabs were old enough to walk, the shrimp often visited them and related to them the sad fate of their parents.

Even today, you can watch the fiddlers, as little crabs are now often called, rushing into the sea waters, as if about to fight the waves and running back to the land as they find the waves rushing on them, as if due to a lack of courage to combat. They continually run back and forth. They live neither on dry land, as their ancestors did, nor in the sea, like the other crabs, but upon the beach, where the waves wash over them at high tide and try to dash them to pieces.