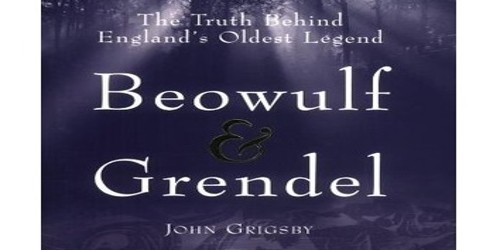 Beowulf and Grendel (An English Legend)

Long ago, in the land we know as Denmark, King Hrothgar ruled. He was loved and admired by his people. Hrothgar built a great hall called Heorot, with a splendid gold roof. Each evening he and his lords, called thanes, and warriors feasted, shared stories and listened to music. The great hall was filled with the sounds of harps and songs and merrymaking.

Everyone loved Heorot except two evil inhabitants of the land, the monster Grendel and his sorceress mother. Grendel was a fierce and loathsome creature who roamed the moors and despised all people and their pleasures. He was the enemy of everything pure and true, honest and kind. He lived only to make misery for others.

At night, when Grendel heard the joyous sounds from Heorot, he shuddered with fury. Bent on destruction, he skulked to the hall and carried off a sleeping warrior. In the morning, when the others woke and found one of their comrades gone, they wept with sorrow, but none felt strong enough to hunt Grendel and follow him to his faraway lair on the dank moors.

Again and again, Grendel carried off a warrior, and before long the beautiful hall was abandoned. King Hrothgar, growing old, despaired that his country would be ruined by the wicked monster.

Tales of Grendel’s evil spread across the sea and reached the ears of a young warrior prince named Beowulf. When he heard the story of Grendel, he vowed he would cross the sea and deliver Hrothgar from his enemy, for Beowulf feared no one. He believed that goodness could overcome any evil.

With a band of warriors, Beowulf traveled to Hrothgar’s kingdom where the king’s thanes met them.

“We have heard of the evil deeds of Grendel,” Beowulf said. “Take us to your king so that we may stop this monster’s destruction.”

“I have heard wonderful tales of your Heorot,” Beowulf said to Hrothgar. “Let us go there to feast and to celebrate our new friendship. Such a place should not stand abandoned.”

The thanes were terrified at the notion. “Grendel will come,” they said, but Beowulf insisted, and so, at last, a party made its way to the hall. There they feasted and sang and told stories. When at last everyone fell asleep, it seemed that peace had returned to the kingdom.

But along the moors, Grendel stalked. His heart nearly burst with rage when he saw the lights of Heorot ablaze.

Inside the hall, Beowulf lay awake. He had put aside his sword and armor, for iron could not hurt Grendel, who was protected by a spell. Beowulf heard a rumbling roar outside the doors. His enemy had arrived.

Beowulf opened the great doors of Heorot, and when Grendel saw him, he seized the warrior. Beowulf grasped Grendel’s arm in a powerful grip and twisted it. The monster’s mind whirled. His body trembled. No one had ever tried to overcome him. No one had ever had such strength.

You may think it odd that Beowulf, so much smaller than Grendel, could fight so easily, but goodness and nobility create strength, and so the struggle between man and monster raged on. When Beowulf’s men heard the row, they ran outside, their swords drawn.

“Drop your swords,” Beowulf cried to his men, “for they will do no good. I must do this alone.”

Grendel struggled to free himself from Beowulf’s grasp, and when at last he broke away after many hours, he disappeared into the darkness, weak and spent. He dragged himself back to his lair, where he died from exhaustion and from the humiliation of being defeated by a mere mortal.

Word spread of Grendel’s death. The king and his people celebrated, singing songs about their new hero. They told stories in his honor and believed that from that day on they would live in peace. But they had forgotten one thing: Grendel’s sorceress mother lived still and had sworn revenge for his death.

One night she stole into Heorot and carried off one of Hrothgar’s sleeping thanes. Again the old king knew there would be no real peace in his kingdom until the sorceress witch was destroyed. He begged Beowulf to help him once more.

Beowulf set off for the dark, fetid swamp where the witch lived in a great cavern beneath tangled marshes and brackish streams. When he reached the lake that was her home, he dived in. The moment he did, the lake burst into flame. Even this did not stop Beowulf, though his men, standing onshore, could only watch in horror.

Beowulf swam deeper and deeper until at last, he saw Grendel’s mother.

She clasped him in her gigantic arms and sped toward her cave. They came to a place so well-lighted that Beowulf, at last, could see the creature whose evil heart had turned her so ugly she dared not show herself to those who lived above. Beowulf struggled with her until he finally overcame her with her own enchanted sword.

But Beowulf’s warriors, waiting near the edge of the lake, were filled with fear as the hours passed and their master did not return. When they saw the water running red, they cried, “Our leader has been slain.” But as they turned to flee, they heard a shout behind them. They saw the exhausted Beowulf crawling from the lake of fire.

The men ran to him. As they dressed his wounds, they asked, “Did you destroy her?”

“She destroyed herself,” Beowulf answered. “Evil turns upon itself. She wished the only destruction, and that is what she has found.”

And so it was that Hrothgar’s people learned from the great Beowulf the strength of an honest heart, and they lived for many years in peace.