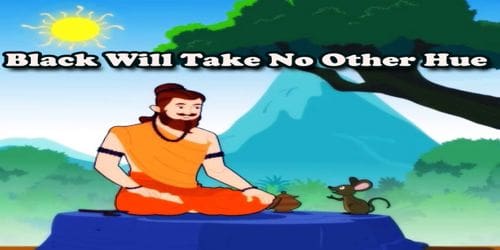 Black Will Take No Other Hue

There lived a saint in a forest. He was very kind. Once a mouse ran because a cat attacked it. The saint felt pity for the poor mouse. So he turned the mouse into a beautiful woman. The saint told it that he had to behave and act like a human being. The saint also warned it that if it behaved like a mouse for once, it would instantly get back its original form. The mouse followed the saint’s instructions. She became a total human being. Her beauty charmed even the animals living in the forest. She fetched water from the spring and cooked meals for the saint.

One day the prince of the kingdom came to the forest for hunting. When he went near the spring, he Caught sight of her. Her beauty cast a spell on him. He fell in love with her. He met the saint and told him that he wanted to marry her. The saint tried to make him understand that she was not his match. But the prince was madly in love with her. He went back to his palace and convinced the king to give consent to his desire. Very soon the marriage ceremony was held in a gorgeous and stately fashion.

On the nuptial night when they were sleeping together, the prince’s silk attire attracted the bride. As she was a woman-turned mouse, she could not resist the temptation of eating the colorful silk cloth. No sooner had she put her teeth into the cloth than she turned into a mouse. She then remembered the saint’s warning. But it was too late. It had no other alternative to rectify its mistake.