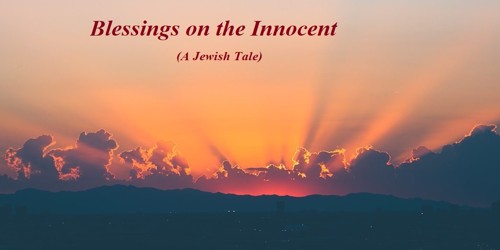 Blessings on the Innocent (A Jewish Tale)

Blessings on the Innocent (A Jewish Tale)

Long ago, a traveler journeyed all over the known world, seeking to learn all he could about the customs and traditions of various lands. One day he came upon some people who lived in a secluded corner of the world. They seemed to the traveler to be full of joy and peace. The traveler asked to be shown to their chief.

The chief received the traveler with generosity and kindness. He showered him with food and drink and all the comforts of his home.

When they had finished with their feast, the chief looked with curiosity at the stranger. “Why is it that you have left your homeland?” he asked, for he could not imagine traveling. Everything he wished for he had in his own home. “Do you have enough food in your homeland?”

“Are you seeking gold?” the chief asked.

The traveler laughed. “We have food and many treasures. I am traveling because I want to learn the ways and customs of other people. If you will allow me to observe your people, I will understand more about the ways of the world. That is all I wish.”

“You are welcome,” the chief said, “and now you will have an opportunity to see the way we practice justice. Today two men have come to me to settle a dispute.”

A moment later, the two men appeared before the chief.

The first man, a humble farmer, bowed his head to the chief. “I have come here to settle a problem. I bought a piece of land from this man here,” and he pointed to the second farmer who stood beside him. “I was digging a ditch through the land when I found a buried treasure. The treasure is not mine. I tried to give the treasure to the owner, for I purchased only the land. But he has refused to take it from me.”

“And what do you say to these accusations?” the chief asked the second man.

“I am a fair man. I sold this man the land with all its possessions. He bought the trees and the soil, the rocks and the weeds. The treasure should be his, for like the weeds and rocks and soil and trees, the treasure is one part of the land.”

The chief listened carefully to each man. Then he was silent, thinking over the dispute. He hoped to solve this problem to everyone’s satisfaction.

He turned to the first man. “I believe you have a son, am I correct?”

“And you,” the chief said to the second man, “you have a daughter, is that true?”

“And do your son and daughter like each other?”

“Oh yes, they are great friends,” the two men said.

“This then is my judgment. Your son will marry your daughter. Together you will give to them the treasure found beneath the land as their marriage gift.”

The two men thanked the chief and departed, satisfied that their problem was solved and eager to obey the chief’s judgment.

The traveler looked puzzled. “I am surprised,” he said to the chief.

“Do you think I have been unjust?” the chief asked.

“Oh no,” said the traveler, “but in my country, we do things differently. We would have seized the treasure and given it to our king.”

“To your king?” the chief asked, astonished.

“That is the way in our country.”

“Tell me this, sir. Does the sun shine down upon your country?”

“Yes, of course, it does,” the traveler said.

“And do the rains fall upon your earth?”

“And also tell me this,” the chief said. “In your country are there animals that live on grass and herbs and fruits of your land?”

“Very many animals, indeed,” said the traveler. “They are healthy and strong.”

“Ah,” the chief said, and he smiled and nodded his head in understanding. “It is for the sake of those innocent animals that the Lord allows the sun to shine and the rain to fall upon your country. Surely human beings who steal treasures from their own people are unworthy of the Lord’s blessings, but the Lord looks after the innocent.”

A version of this story originated in the Agada, the storytelling portion of The Talmud, and has been translated and adapted by many different authors over the centuries. The most renowned of these adaptations was made by the English poet Samuel T. Coleridge (“The Lord Helpeth Man and Beast”). In this version, the visitor is Alexander of Macedonia (Alexander the Great), who is featured in many tales found in Jewish folklore, and the people Alexander visited were based in a remote corner of Africa.