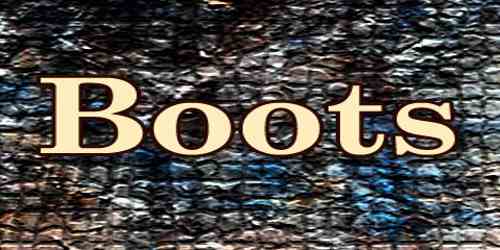 A PIANO-TUNER called Murkin, a close-shaven man with a yellow face, with a nose stained with snuff, and cotton-wool in his ears, came out of his hotel-room into the passage, and in a cracked voice cried: “Semyon! Waiter!”

And looking at his frightened face one might have supposed that the ceiling had fallen in on him or that he had just seen a ghost in his room.

“Upon my word, Semyon!” he cried, seeing the attendant running towards him. “What is the meaning of it? I am a rheumatic, delicate man and you make me go barefoot! Why is it you don’t give me my boots all this time? Where are they?”

Semyon went into Murkin’s room, looked at the place where he was in the habit of putting the boots he had cleaned, and scratched his head: the boots were not there.

“Where can they be, the damned things?” Semyon brought out. “I fancy I cleaned them in the evening and put them here. . . . H’m! . . . Yesterday, I must own, I had a drop. . . . I must have put them in another room, I suppose. That must be it, Afanasy Yegoritch, they are in another room! There are lots of boots, and how the devil is one to know them apart when one is drunk and does not know what one is doing?. . . I must have taken them in to the lady that’s next door . . . the actress. . . .”

Sighing and coughing, Murkin went to the door of the next room and cautiously tapped.

“Who’s there?” he heard a woman’s voice a minute later.

“It’s I!” Murkin began in a plaintive voice, standing in the attitude of a cavalier addressing a lady of the highest society. “Pardon my disturbing you, madam, but I am a man in delicate health, rheumatic. . . . The doctors, madam, have ordered me to keep my feet warm, especially as I have to go at once to tune the piano at Madame la Gnrale Shevelitsyn’s. I can’t go to her barefoot.”

“But what do you want? What piano?”

“Not a piano, madam; it is in reference to boots! Semyon, stupid fellow, cleaned my boots and put them by mistake in your room. Be so extremely kind, madam, as to give me my boots!”

There was a sound of rustling, of jumping off the bed and the flapping of slippers, after which the door opened slightly and a plump feminine hand flung at Murkin’s feet a pair of boots. The piano-tuner thanked her and went into his own room.

“Odd . . .” he muttered, putting on the boots, it seems as though this is not the right boot. Why, here are two left boots! Both are for the left foot! I say, Semyon, these are not my boots! My boots have red tags and no patches on them, and these are in holes and have no tags.”

Semyon picked up the boots, turned them over several times before his eyes, and frowned.

“Those are Pavel Alexandritch’s boots,” he grumbled, squinting at them. He squinted with the left eye.

“Then go and change them!”

“Where does he live then?”

“Who can tell? He comes here every Tuesday, and where he lives I don’t know. He comes and stays the night, and then you may wait till next Tuesday. . . .”

“There, do you see, you brute, what you have done? Why, what am I to do now? It is time I was at Madame la Gnrale Shevelitsyn’s, you anathema! My feet are frozen!”

“You can change the boots before long. Put on these boots, go about in them till the evening, and in the evening go to the theatre. . . . Ask there for Blistanov, the actor. . . . If you don’t care to go to the theatre, you will have to wait till next Tuesday; he only comes here on Tuesdays. . . .”

“But why are there two boots for the left foot?” asked the piano-tuner, picking up the boots with an air of disgust.

“What God has sent him, that he wears. Through poverty . . . where is an actor to get boots? I said to him ‘What boots, Pavel Alexandritch! They are a positive disgrace!’ and he said: ‘Hold your peace,’ says he, ‘and turn pale! In those very boots,’ says he, ‘I have played counts and princes.’ A queer lot! Artists, that’s the only word for them! If I were the governor or anyone in command, I would get all these actors together and clap them all in prison.”

Continually sighing and groaning and knitting his brows, Murkin drew the two left boots on to his feet, and set off, limping, to Madame la Gnrale Shevelitsyn’s. He went about the town all day long tuning pianos, and all day long it seemed to him that everyone was looking at his feet and seeing his patched boots with heels worn down at the sides! Apart from his moral agonies he had to suffer physically also; the boots gave him a corn.

In the evening he was at the theatre. There was a performance of Bluebeard. It was only just before the last act, and then only thanks to the good offices of a man he knew who played a flute in the orchestra, that he gained admittance behind the scenes. Going to the men’s dressing-room, he found there all the male performers. Some were changing their clothes, others were painting their faces, others were smoking. Bluebeard was standing with King Bobesh, showing him a revolver.

“You had better buy it,” said Bluebeard. “I bought it at Kursk, a bargain, for eight roubles, but, there! I will let you have it for six. . . . A wonderfully good one!”

“Can I see Mr. Blistanov?” the piano-tuner asked as he went in.

“Excuse my troubling you, sir,” began the piano-tuner in an imploring voice, “but, believe me, I am a man in delicate health, rheumatic. The doctors have ordered me to keep my feet warm . . .”

“But, speaking plainly, what do you want?”

“Your wife, sir? Delighted. . . .” Murkin smiled. “It was she, your good lady, who gave me this gentleman’s boots. . . . After this gentleman the piano-tuner indicated Blistanov “had gone away I missed my boots. . . . I called the waiter, you know, and he said: ‘I left your boots in the next room!’ By mistake, being in a state of intoxication, he left my boots as well as yours at 64,” said Murkin, turning to Blistanov, “and when you left this gentleman’s lady you put on mine.”

“What are you talking about?” said Blistanov, and he scowled. ” Have you come here to libel me?”

“Not at all, sir God forbid! You misunderstand me. What am I talking about? About boots! You did stay the night at No. 64, didn’t you?”

“No, sir, I didn’t see you,” said Murkin in great confusion, sitting down and taking off the boots. “I did not see you, but this gentleman’s lady threw out your boots here to me . . . instead of mine.”

“What right have you, sir, to make such assertions? I say nothing about myself, but you are slandering a woman, and in the presence of her husband, too!”

A fearful hubbub arose behind the scenes. King Bobesh, the injured husband, suddenly turned crimson and brought his fist down upon the table with such violence that two actresses in the next dressing-room felt faint.

“And you believe it?” cried Bluebeard. “You believe this worthless rascal? O-oh! Would you like me to kill him like a dog? Would you like it? I will turn him into a beefsteak! I’ll blow his brains out!”

And all the persons who were promenading that evening in the town park by the Summer theatre describe to this day how just before the fourth act they saw a man with bare feet, a yellow face, and terror-stricken eyes dart out of the theatre and dash along the principal avenue. He was pursued by a man in the costume of Bluebeard, armed with a revolver. What happened later no one saw. All that is known is that Murkin was confined to his bed for a fortnight after his acquaintance with Blistanov, and that to the words “I am a man in delicate health, rheumatic” he took to adding, “I am a wounded man. . . .”