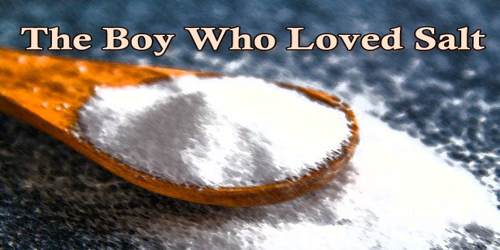 The Boy Who Loved Salt

Once upon a time, a king had three sons, and he wished to know if his sons truly loved him. He sent for them one at a time. When his oldest son appeared, the king asked solemnly, “Son, do you love me?”

“Father,” said the oldest lad, “I love you more than all the gold and diamonds and rubies and emeralds on Earth. You are more valuable to me than all these jewels.”

The king was pleased, and next called his second son to his chamber. “Do you love me, son?” he asked. “Answer me honestly.”

“Father,” said the second boy, “I love you more than honey and sugar and all the sweets in the world combined.”

The king was even more pleased. A smile on his face, he called in his third son and asked, “Do you love me, son? Tell me the truth.”

“Dear father,” said the third lad, whose name was Ozdan, “you are as dear to me as salt.”

When the king heard this, he became enraged. “Salt!” he cried. “I am as valuable as salt, you say. How dare you cast such insults on the king!”

The boy trembled and tried to speak, but his father cried, “Hush,” and called his servants to his chamber. “Take this lad up into the mountains and leave him to die there.”

The servants bound the third son and they rode into the mountains, but they could not bring themselves to abandon the boy with nothing to eat and nowhere to go. He had always been kind and generous to them.

So they cut his bonds and said: “We cannot leave you to die. We will take you to a faraway village, and there we will leave you. But you must promise never to show your face in your father’s kingdom.” Ozdan, much relieved, agreed.

And so he came to live in another land. After a few days, Ozdan learned that the king of this new land had died. According to the custom of this land, everyone would gather in the village square so that a new king might be chosen.

That afternoon Ozdan joined the others when they gathered, and he listened closely as the villagers explained their customs. A captive bird would be set free. Whoever’s head the bird settled upon would be chosen, king.

The cage was brought out and the bird was released. It flew into the air, circled, and then, without a moment’s hesitation, it flew down and landed on Ozdan’s head.

“This cannot be!” some of the young men cried. “This man is a stranger. According to our custom, we must fly the bird three times before he has chosen the rightful king.”

So the next day the villagers met again. This time the bird flew into the air, glided and swooped, and once again it dived toward the ground and landed on Ozdan’s head.

Now everyone understood that Ozdan was meant to be their king, and so he began his rule. He ruled so wisely and well that all the people soon loved and admired him and were glad they had followed their custom.

Many years passed. Ozdan was happy in his new land, and he loved his position and his people, but he always thought of his father. At last, he sent word to his father’s kingdom, inviting his father to a feast.

The king, having no idea that the king who had invited him was his long-lost son, agreed to visit.

Now Ozdan summoned his cook and instructed him to prepare every dish for the feast, but without using any salt. “Not one grain of salt, do you understand?” Ozdan said.

“But sir, the food will have so little taste,” the cook argued.

“No salt at all,” King Ozdan insisted. The cook bowed and agreed.

The night of the feast came, and Ozdan’s father arrived with his two other sons as his escorts. No one recognized Ozdan, for many years had passed, and besides, Ozdan was dressed in elegant royal robes such as none expected him to wear. They sat down to eat.

After the first saltless dish, King Ozdan asked, “And do you like our food?” His father, the king, smiled and nodded, though he thought the food was quite tasteless.

After the second dish, Ozdan asked again, and once again the king nodded. “Tasty,” he said. But when the third dish came and he tasted this one, he grimaced.

“Something is wrong?” Ozdan asked. “You look displeased.”

“Then why do you not add it to your food?” asked the old king, quite puzzled.

“I gave orders to leave the salt out of your food,” King Ozdan replied. “I understood that you do not like salt.”

“Me? Not like salt? We cannot live without salt. I surely cannot.”

King Ozdan knew the time had come to reveal himself to his father.

“We cannot live without salt,” he said, repeating his father’s words. “And when I told you many years ago that I loved you as much as I love salt, you sent me away to die.”

Now the old king recognized his son, and he also recognized his own folly. He bent down and begged his son to find in his heart the grace to pardon the terrible wrong the king had committed.

King Ozdan embraced the old king, and they wept in each other’s arms. And the salt of their tears was as sweet to the father as to the son.