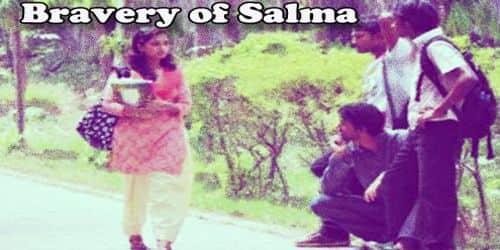 Salma is a very brilliant student of Central Women’s College. She is also very polite, gentle and well behaved. She goes to her college by rickshaw. But a local terrorist named Nayan disturbs her very often on the way of her college. Sometimes, he stops the rickshaw offers love or behaves obnoxiously. Salma informs her parents about the matter. Her parents request the parents of Nayan to stop him from doing this. This makes Nayan more furious and desperate. He along with his fellow terrorists threatens the parents of Salma and continues to create disturbance to Salma.

Being helpless, Salma’s parents forbid Salma to go to college. But Salma is very courageous. She is not ready to surrender so easily. She makes a different plan. She reveals the matter to one of her cousins who is an officer in RAB. According to her plan, she invites Nayan in a restaurant to have a cup of tea. Nayan was extremely happy to get the invitation. The RAB team has already arrived at the restaurant as per Salma’s plan. As soon as Nayan reaches there, the RAB team arrests him and forward him for further punishment. Thus, Salma has become a glaring example of bravery among her classmates.