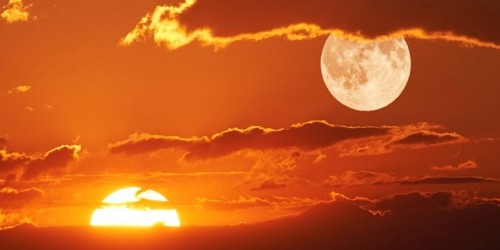 Bright Sun and Pale Moon (A Tale From West Africa)

Long ago, in the earliest days of the world, Sun and Moon were the best of friends. They shared secrets as well as the sky. Sun shone all day long, bright and hot. Moon took over Sun’s place at night. In those days Moon glimmered and shimmered as brightly as Sun, and all the people praised them both.

But as time passed, Sun grew jealous of Moon. He wanted more power.

One day, Sun proposed that they both take a bath in Sky River, each with his own family.

“That sounds like a fine idea,” Moon said, for in those days, everything Sun proposed sounded good to Moon.

“We’re set, then,” Sun said. “I’ll bathe upstream with my family, just around that bend in Sky River. I’ll go in first to test the water to make certain it’s all right for you.”

“If you’re around the bend, how will I know when you’ve begun to bathe?” Moon asked his friend.

“It’s simple,” Sun replied. “When you see the water steaming, you’ll know I’ve entered. I will heat the water. Then you and your family can get in and bathe.”

“Excellent plan,” said Moon, who went off to gather his family.

Meanwhile, Sun and his family set off. They journeyed until they were around the bend and out of Moon’s sight.

“Now light the branches,” Sun commanded his family. The family set the branches on fire and fanned them until they blazed bright red.

Moon and his family bathed in comfort. They stepped from the river, clean and warm. But when Moon climbed onshore, he looked down and saw that he had grown pale. When he touched his belly, he felt all his heat washing away. The boiling water had drained away Moon’s heat.

Soon Sun appeared. Moon frowned when he saw that Sun was as bright and hot as ever. He was smiling broadly, and his heat was so strong that Moon could feel it burning his skin even from afar.

“I’ve tricked you!” Sun cried. “From this day on, I will shine more brightly than you, and I will be the only one who gives the people heat. They will praise only Sun!”

Moon realized his friend had betrayed him. He was so hurt, he fumed and fussed, but he did not know what to say or do.

Some time passed. Each day Sun climbed into the sky and shone down on the land, hotter than ever before. At night Moon slowly rose to take his place, casting his cool, soft light upon the earth.

Before long, the greater heat of the Sun caused the grasses to wilt. The rain did not fall to ease the heat, and the cattle grew hungry. They began to die, and before long the people had little food to eat. A famine cursed the land.

Now Moon knew what he must do. So one day he said, “Sun, this famine will kill everyone in the end. I propose we end our own families’ suffering by sending them to a land far away. I will go around the bend and prepare my family’s boats. When you see their boats floating downstream, you will know they have begun their journey. It will be your turn to send your family away.”

Sun agreed, for he knew the world could no longer contain so many people.

Moon and his family moved out of sight around the bend. They filled their boats with large white rocks and sent these downstream.

Around the bend, Sun ordered his family into their boats. When he saw the boats with white figures floating downstream, he pushed his family’s boats from shore. They floated away on the swift current.

Moments later, Moon returned to Sun, surrounded by his family. “I have had my revenge on you, Sun, for now, you have sent your family away, but as you see, my family has remained with me onshore.”

Sun was so sad that he hid his face from the world for many months. Rain began to fall, and soon the grasses grew once more. The famine ended.

At last, Sun ended his mourning and climbed into the sky again. To this day Sun shines in the sky, but he is all alone. And it is true that Moon is pale and cool, but he is surrounded by his family, shining and twinkling. We call Moon’s family stars.

Since that time, Moon and Sun have agreed never to play tricks on each other, for they learned that jealousy and revenge cause the only destruction. Instead, they share the sky and shine down on the world, bringing warmth and light to all who live there.