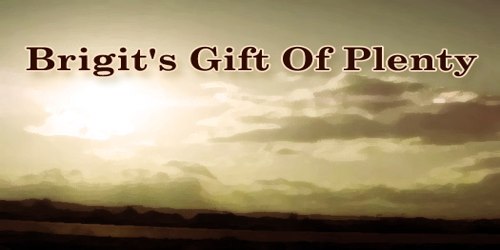 Now Brigit the woman who was to become St. Brigit of Ireland was born at sunrise on the first day of spring, and what a lovely day it was, and what a special and generous child she was.

The angels, they say, baptized her, giving her the name Brigit because it means “fiery arrow,” and oh, she was a quite a girl, with spirit and a determination to do good. Whenever she saw something she could make better, she set her mind to it and in that determination, there was a kind of wondrous power.

Brigit’s mother was no princess. No, she was a servant girl, and that is what Brigit grew up to be, too, but the angels and the Druids knew she was a special child. As a child, she owned a white cow with red ears. That set her apart from the rest from the very beginning. Like Brigit, her cow was pure and good, and the milk she gave tasted sweeter than any other milk in Ireland. But it was not only Brigit’s cow that was special; she had a special way with all animals. Also, everything she touched seemed to grow and increase, and in this way, Brigit helped many people in Ireland.

Brigit used her power for good to help others, and many tell the tale of the ways she worked. Brigit is said to have woven the first piece of cloth in Ireland, and her cloth had the power to heal. She helped to increase farmers’ crops and flocks, and nurtured the birds and beasts, and helped the poor.

Once, when she had grown to young womanhood, Brigit went to her father’s house to stay awhile. She did not often spend her time with him, for he had become annoyed with her years earlier when she tried to give away all his possessions to the poor. But her father was a decent man, and Brigit looked after him well on her visit, as she had looked after so many others.

One evening her father came to her with a sackful of wheat and a basket of bacon. “Take care to cook this well,” her father said. “We have an important guest coming to supper tonight, and I want him to share a special meal.”

“Of course, father,” Brigit said, and peering into the basket, she saw five thick slices of bacon quite a treat. “Don’t worry, father; I shall fry this bacon till it is sizzling and crisp, and I will serve your friend a meal such as he has never known.”

Her father had come to have great faith in his daughter, and leaving her to her work, he set off for an afternoon walk through the woods.

While Brigit was preparing the supper, she heard a sound at the back door. There was scratching, followed by the most pitiful whimpering. She rushed to the door, and there she saw the skinniest, sorriest hound she had ever seen. His coat was rough, and his ribs showed through, and Brigit’s heart broke at the sight of him.

“Come in, come in,” she said to the poor creature, who, sniffing the air and smelling the aroma of cooking bacon, limped inside.

“Here then,” Brigit said, and she handed the hound a thick piece of bacon.

Oh, you can imagine his joy at the taste of such a treat. He swallowed it in a gulp, and Brigit was certain she could see him smile. She patted his back, and feeling the ribs, she cringed. “You must have more,” she said, and she handed him another slice, which he gobbled down.

The poor old hound sighed and licked his lips. Brigit could not stop herself and reached into the pan and handed the dog a third slice of bacon. He swallowed this one, too.

Naturally, she fed every piece of that bacon to the starving creature and fed him other food as well, and when he was full, he licked her hand, slipped outside and fell into a peaceful sleep at the back door. Brigit returned to her tasks.

Just then her father returned from his walk in the woods. “Daughter,” he said, “how is the meal?” And he looked into the pan, and sure enough, there were five sizzling slices of bacon, as if Brigit had never taken any away. This was her special gift, to create abundance.

“Now we shall sit down to eat,” her father said and went to summon his guest. When they were gathered at the table, the guest turned to Brigit and said, “You did not see me in the yard earlier?”

“Ah, well, I watched you as you fed that poor, starving hound, and I see that you are a special woman. You taught me about generosity as you worked,” He looked at his friend, Brigit’s father, and lifted the plate of bacon as a salute to Brigit.

“This will be for the hound,” he said, and her father agreed, for they could see the miraculous power of a generous heart.