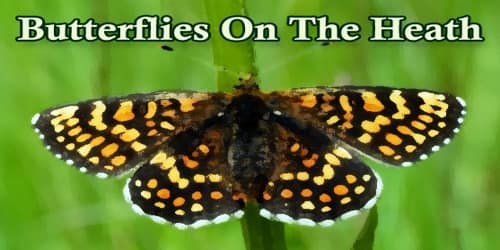 Butterflies On The Heath

One hot summer day on a heather cliff high above the sea, dozens of butterflies hovered over a sunlit field.

Tortoiseshells and fritillaries, a giant peacock, a monarch and an admiral fluttered in the air, displaying their beautiful wings to anyone who cared to look.

They loved to dance in the sunlight and display their colors, but as they danced, the brown heaths and the hair-streaks and the skippers came by. They were butterflies, too. Or so they said. But their wings were not nearly as colorful as those of the others. “Ohhh,” cried the peacock butterfly with disdain, “what homely creatures those are,” as she looked at the dull creatures passing by. “Isn’t it a shame,” she said to a robin who stood nearby, “those dingy creatures should be permitted to frolic with our kind?”

“A shame indeed,” agreed with the monarch. “Superior creatures like ourselves ought not to be compared to them.”

The admiral nodded heartily. “Send them away. How dare they call themselves butterflies?”

“You don’t mean us?” the jaunty blue butterflies asked. “Look at our wings. We’re as lovely as the sea and sky.”

“Oh,” said the peacock, “lovely you maybe, but not nearly so lovely as we.”

“We’re beautiful,” said the fritillaries. “Just look at these designs we wear.”

Now the robin who stood nearby was annoyed. “Let everyone have a chance,” he said. He thought the butterflies sounded haughty and vain, and he wished they would keep quiet. They were beautiful to look at, but oh what a fuss they made about themselves.

But the painted butterflies would not be quiet. “Just suppose a purple emperor came by,” said the monarch. “What would he think if he saw us cavorting with that sort of …”

“Thing!” added the admiral. “They can’t be butterflies. They can only be things.”

The poor little brown heaths were dismayed beyond words, and they agreed that they must fly away.

“We’ll keep low to the ground when we fly,” they promised the peacock. “No one will notice us.”

“And don’t call yourselves butterflies, please,” the peacock cried, delighted at their decision to leave.

So they flew off, keeping low to the ground as they promised. Meanwhile, the peacock and the monarch, the admiral and the fritillaries flew high into the air, up toward the sun.

As they flew along, two boys carrying butterfly nets, happened past. “Look,” cried one boy, “look at that peacock butterfly. Now there’s a catch!” He lifted his net high into the air and raced after the peacock. “You try for another,” he called to his friend as he ran.

Even in captivity, the butterflies were vain. “Just look at us!” the peacock cried, irritated at the indignity of being trapped. “How dare you try to capture us?” The boys, though they could not understand the butterflies’ language, were indeed looking at their catch. “They’re beautiful,” one boy said. “Let’s put them into our bottles.”

The boys were butterfly collectors, and they sought only the painted insects, the creatures with the loveliest wings. And so the peacock and the admiral were bottled.

Now the fritillaries and monarchs were frightened, and they began to fly as fast as they could, but they never noticed the swallows circling overhead.

“Dive, lads,” cried the head swallow, and the swallows swooped and caught every last one of those fabulous butterflies in their beaks. A moment later they were swallowed right down.

The brown heaths still traveled, flying low to the ground. As they flew, the two boys with their butterfly nets walked by.

“Look at that,” said one of the boys, “dozens of butterflies. Would you like any of those?”

“Oh no,” said the second boy, “we ought to collect only colorful specimens. These fellows are very common, and they’re not much to look at either.” His friend agreed.

And so the boys passed by, and the brown butterflies, still hovering above the heather, looked in relief at each other.

“I suppose,” one of the heaths said, “it isn’t always bad to be small and plain-looking.”

“I would say you’re right,” answered another.

“We won’t attract the boys and the birds dressed this way,” said a third.

And on they flew, happy now to be just as they were, and free to enjoy the sweet summer day.