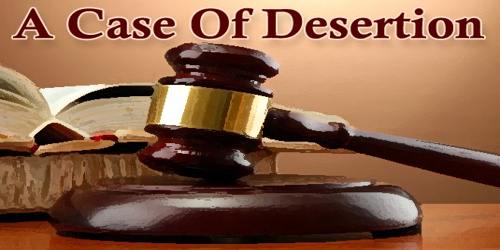 A Case Of Desertion

The sun was just rising as the small tub-like steamer, or, to be more correct, steam-barge, the Bulldog, steamed past the sleeping town of Gravesend at a good six knots per hour.

There had been a little discussion on the way between her crew and the engineer, who, down in his grimy little engine-room, did his own stoking and everything else necessary. The crew, consisting of captain, mate, and boy, who were doing their first trip on a steamer, had been transferred at the last moment from their sailing-barge the Witch and found to their discomfort that the engineer, who had not expected to sail so soon, was terribly and abusively drunk. Every moment he could spare from his engines he thrust the upper part of his body through the small hatchway and rowed with his commander.

“Ahoy, bargee!” he shouted, popping up like a jack-in-the-box, after a brief cessation of hostilities.

“Don’t take no notice of him,” said the mate. “He’s got a bottle of brandy down there, and he’s half-mad.”

“If I knew anything o’ them blessed engines,” growled the skipper, “I’d go and hit him over the head.”

“You think you’re a fine feller,” continued the engineer, “standing up there an’ playing with that little wheel. You think you’re doing all the work. What’s the boy doing? Send him down to stoke.”

“Go down,” said the skipper, grinning with fury, and the boy reluctantly obeyed.

“You think,” said the engineer pathetically, after he had cuffed the boy’s head and dropped him down below by the scruff of his neck, “you think because I’ve got a black face I’m not a man. There’s many a hoily face ides a good art.”

“I don’t think nothing about it,” grunted the skipper; “you do your work, and I’ll do mine.”

“Don’t you give me none of your back answers,” bellowed the engineer, “cos I won’t have them.”

The skipper shrugged his shoulders and exchanged glances with his sympathetic mate. “Wait till I get him ashore,” he murmured.

“The biler is wore out,” said the engineer, re-appearing after a hasty dive below. “It may bust at any moment.”

As though to confirm his words fearful sounds were heard proceeding from below.

“I thought it was the biler,” said the skipper, with a sigh of relief. “It was loud enough.”

As he spoke the boy got his head out of the hatchway, and, rendered desperate with fear, fairly fought his way past the engineer and gained the deck.

“Very good,” said the engineer, as he followed him on deck and staggered to the side. “I’ve had enough o’ you lot.”

“Hadn’t you better go down to them engines?” shouted the skipper.

“Go down and do your work like a sensible man,” was the reply.

At these words the engineer took umbrage at once and, scowling fiercely, removed his greasy jacket and flung his cap on the deck. He then finished the brandy which he had brought up with him and gazed owlishly at the Kentish shore.

“I’m going to have a wash,” he said loudly, and, sitting down, removed his boots.

“Go down to the engines first,” said the skipper, “and I’ll send the boy to you with a bucket and some soap.”

“Bucket!” replied the engineer scornfully, as he moved to the side. “I’m going to have a proper wash.”

“Hold him!” roared the skipper suddenly. “Hold him!”

The mate, realizing the situation, rushed to seize him, but the engineer, with a mad laugh, put his hands on the side and vaulted into the water. When he rose the steamer was twenty yards ahead.

“How can I go astarn when there’s nobody at the engines?” shouted the skipper, as he hung on to the wheel and brought the boat’s head sharply round. “Git a line ready.”

The mate, with a coil of rope in his hand, rushed to the side, but his benevolent efforts were frustrated by the engineer, who, seeing the boat’s head making straight for him, saved his life by an opportune dive. The steamer rushed by.

“Turn her again!” screamed the mate.

The captain was already doing so, and in a remarkably short space of time the boat, which had described a complete circle, was making again for the engineer.

“Look out for the line!” shouted the mate warningly.

“Come aboard!” shouted the captain imploringly, as they swept past again. “We can’t manage the engines.”

The boat, which was dragging astern, was hauled close, and the mate tumbled into her, followed by the boy, just as the captain was in the middle of another circle?-to the intense indignation of a crowd of shipping, large and small, which was trying to get by.

“Ahoy!” yelled the master of a tug which was towing a large ship. “Take that steam roundabout out of the way. What the thunder are you doing?”

“Picking up my engineer,” replied the captain, as he steamed right across the other’s bows, and nearly ran down a sailing-barge, the skipper of which, a Salvation Army man, was nobly fighting with his feelings.

“Cos I can’t,” wailed the skipper of the Bulldog, as he threaded his way between a huge steamer and a schooner, who, in avoiding him, were getting up a little collision on their own account.

The skipper smiled in an agonized fashion as he shot past, hotly pursued by his boat. The feeling onboard the other craft as they got out of the way of the Bulldog, and nearly ran down her boat, and then, in avoiding that, nearly ran down something else, cannot be put into plain English, but several captains ventured into the domains of the ornamental with marked success.

“Shut off steam!” yelled the engineer, as the Bulldog went by again. “Draw the fires, then.”

“Who’s going to steer while I do it?” bellowed the skipper, as he left the wheel for a few seconds to try and get a line to throw them.

By this time the commotion in the river was frightful, and the captain’s steering, as he went on his round again, something marvelous to behold. A strange lack of sympathy on the part of brother captains added to his troubles. Every craft he passed had something to say to him, busy as they were, and the remarks were as monotonous as they were insulting.

At last, just as he was resolving to run his boat straight down the river until he came to a halt for want of steam, the mate caught the rope he flung, and the Bulldog went down the river with her boat made fast to her stern.

“Come aboard, you lunatic!” he shouted.

“Not afore I know how I stand,” said the engineer, who was now beautifully sober, and in full possession of a somewhat acute intellect.

“What do you mean?” demanded the skipper.

“I don’t come aboard,” shouted the engineer, “until you and the mate and the bye all swear as you won’t say nothing about this little game.”

“I’ll report you the moment I get ashore,” roared the skipper. “I’ll give you in charge for desertion. I’ll”

With a supreme gesture the engineer prepared to dive, but the watchful mate fell on his neck and tripped him over a seat.

“Come aboard!” cried the skipper, aghast at such determination. “Come aboard, and I’ll give you a licking when we get ashore instead.”

The engineer, with all the honors of war, came on board, and, after remarking that he felt chilly bathing on an empty stomach, went down below and began to stoke. In the course of the voyage he said that it was worthwhile making such a fool of himself if only to see the skipper’s beautiful steering, warmly asseverating that there was not another man on the river that could have done it. Before this insidious flattery, the skipper’s wrath melted like snow before the sun, and by the time they reached port, he would as soon have thought of hitting his own father as his smooth-tongued engineer.