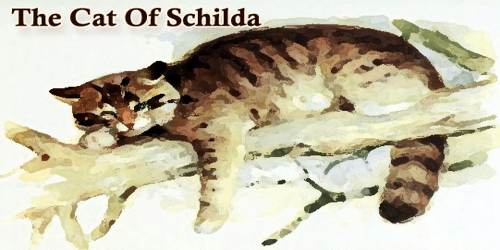 Long ago in Germany there lived a group of the wisest men in the world. Kings and princes called upon these men of Schilda to sit on their councils. Their wisdom was so valuable that leaders everywhere could not live without the Schildburgers, and so, as time passed, the men were at homeless and less often.

After a while they discovered their lives back home were in shambles their fortunes squandered, their wives upset, their children running wild.

Well, these men were so wise; they came up with an extraordinary plan. They began to behave as if they were fools, and they did this so well and for so long that after a while they forgot how to be wise at all. We might know more of their history if a terrible event that happened one spring had never happened.

It began innocently enough. The village of Schilda was so full of mice that nothing was safe not the babies’ cribs, not the closets or beds, not the breadbaskets, bales of hay and stores of rice.

One day a stranger happened to pass through the village, and this stranger brought along a creature no one in Schilda had ever seen. “What sort of animal is that?” the Schildburgers asked of the stranger, and when he explained that the animal was known as a mouser, the men rubbed their beards in wonder. “A mouser, is it?”

Then the stranger set the mouser down.

Now the mice in Schilda had never had to flee from anyone or anything. But when this creature, the mouse or a cat, as it was also known saw all these mice scuttling about, he gave chase. Before long he had caught more than two dozen.

“We need this mouser!” the Schildburgers decided. “Let us buy him from you,” they begged the stranger.

The stranger saw that he could earn a pretty penny for his cat, and so he bargained with the Schildburgers long and hard, and at last, the men of Schilda promised to pay the stranger more money than he had ever known. They would give him one half now, they said, and when he returned in the spring, they would give him the other half.

The stranger knew he would never return, but the Schildburgers had given him so much money already that he thought he must hurry away before they realized their mistake no single cat could possibly be worth such a fortune.

Off he ran down the road, but suddenly the fools of Schilda remembered something. They had forgotten to ask the man what they should feed this beast after all the mice were gone.

“I’ll chase after him,” cried one of the men of Schilda, and off he dashed, running with all his might in an effort to overtake the fleeing stranger.

“Ho there!” he called to the stranger, and thinking his trickery had been discovered, the stranger began to run faster still.

“Sir,” this fool of Schilda called out, “what does the creature eat?”

The fool quickly raced home. “Fellows,” he called, “We must destroy the mouser, or when he has finished off the mice, he will eat us. We’re next!”

When the fools heard this, they panicked. “Kill him,” they chanted, but though they were fools, they were filled with sorrow at the thought of their brand-new creature dead. They could not kill him, and yet if they did not, they realized they all would die instead.

They called a meeting to discuss what to do next, and there they decided to burn down the granary and with it the cat. So they set the granary on fire, but naturally, the cat, feeling the heat, leaped out of the nearest window and dashed to the house next door. So the men of the village council purchased that house from its owner, and this too they set on fire, but again the cat, feeling the heat creeping close, leaped to safety.

And so it went. House after house was set on fire until the whole street was blazing. The cat just moved on to the next house. Finally, the cat sat in the middle of the street washing himself, lifting first one paw and then the other to clean his ears and whiskers.

“Look, he is vowing revenge upon us!” one of the fools cried. The terrified villagers fled for their lives. They ran and ran, and they left behind the fire that burned on until it had consumed every last building in Schilda, and so all of their history burned to ash. The Schildburgers scattered to every corner of the globe, and now there is no place on Earth where fools cannot be found.

As for the cat? He finished off the mice of Schilda and went on his way