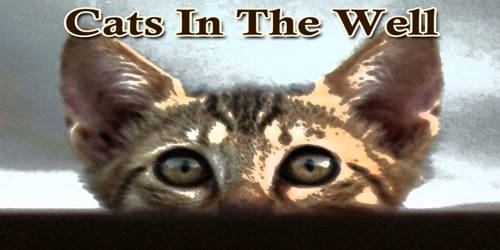 Cats In The Well

Once upon a time, a wicked witch lived at the bottom of a deep, dry well. She spent her days inside that well with her 96 cats. She had collected them to help her with her witchcraft, and for a while, they earned their keep. She sent them off to perform evil deeds, and when they returned home, she fed them treats. When the moon shone full and bright, the cats sat up – all 96 – and they howled like the north wind.

Years passed, and by and by, the cats grew spoiled and lazy. One night the huge orange tom with shining yellow eyes set up a howl. He scratched at the witch’s legs.

“What is it you want?” the witch cried angrily.

“Bring me some sweet whipped cream,” he howled. “I want my cream, and now!”

“And I want crabmeat!” squealed a tabby.

“That’s difficult,” the witch began, for it is hard indeed to come by special treats when you live down a well.

An old Manx scratched at the witch’s bare toes. “I want a shepherd’s pie!”

“And tender steak,” wailed a Siamese. “And shrimp and chicken breasts,” another howled.

Soon all 96 cats were wailing. “Give me lobster and deviled eggs.” “We must have mustard and mayonnaise and melons.” “And Stilton cheese and rabbits’ feet.” “And scallops and sole and sherbet.”

The witch put her hands to her ears. She kicked and flailed her arms. “Stop it,” she cried. “Stop your demands! I’ll give you your treats if only you will stop your howls.” But they did not.

Soon the witch was at her wits’ end. She climbed like a beetle up the rope, and when she reached the top of the well, she sat down to think. She longed to be rid of those cats.

Soon a pleasant young man happened by. He was riding on a lame horse and his clothes were poor and shabby, but when he saw the poor witch wailing and moaning, he came to a quick halt, for he had a generous heart. “What seems to be amiss, good mother?” he asked.

The young man laughed. “That’s quite a few.”

“Perhaps next time you look, there’ll be fewer.”

The witch’s yellow eyes lighted up. “If you can rid me of my cats,” she said, “I’ll give you a new horse and a purse full of gold.”

The young man raised his eyebrows in surprise. “You don’t look like a wealthy woman.”

“Never mind that,” cackled the witch. “Get rid of my cats and I’ll reward you well.”

The young man shrugged and said, “I’ll do my best.” After he had asked a few questions, he looked down at the witch and said, “Go down into your well and tell your brood they’re all invited to a great feast at the inn over the hill.”

The witch agreed and slid down the rope. When she told the cats of the fine invitation, they set up a howl of a complaint. “We’re tired. We don’t want to climb up the rope.” For you see, the cats had grown very lazy.

The witch sighed and trembled with anger, but she was determined. “Very well, I’ll carry you,” she said. All night she climbed the rope, carrying catsup, two by two. At last, she had them all up at the top, and they set off toward the inn.

When the cats smelled the delicious aromas wafting from the inn, their whiskers stood on end. “Ahh, I smell lobster bisque and lemon pie.” “And I smell salty cod and stew.” They trotted still faster.

The young man stood outside the door to welcome the cats to the feast. They looked inside and saw, spread out on a long table, a feast such as none had ever before seen. They meowed and purred and licked their lips.

“Help yourselves, ladies and gentlemen,” said the young man. “There’s plenty here for all.” With that, he beckoned them inside.

Now the cats were so greedy that they did not notice a great pan filled with holy water that stood just inside the door. They rushed for the table, and as they did, each cat, one by one, fell into the pan. It was a horrid sight, for as soon as one touched the holy water, a hiss and a puff of smoke rose up and a fiery-eyed demon shot right up through the chimney!

You see, the man had guessed the truth. These were not real cats. They were but wicked spirits in disguise. The holy water changed them into their true form, and after that, they were never again seen in those parts.

“I’m most grateful,” said the witch to the young man, and she handed him a purse heavy with gold. “Now I’ll go to see about a horse,” she said, “for I always keep my word.”

“Come in for a bite to eat first,” said the generous young man.

“Thanks,” said the witch, trembling, “but I think not.” “You see, I’m not over-fond of that stuff,” and she pointed at the pan of holy water.

That moment they heard a squeal. “Help me!”

The witch and the young man whirled around and looked into the pan. There they saw a tiny black kitten, swimming madly about in the pan.

The young man quickly pulled the cat from the water. She sat and began to lick herself dry.

“What on earth?” asked the witch? “How did you come to be there?”

The little cat looked up and said, “If you please, Mother, I’m not a demon. I’m a real cat. The holy water didn’t hurt me, though I’ll tell you, I don’t much like water.”

The witch squinted and thought hard as she looked at the tiny black cat. “Hmm,” she said at last, “how would you like to be a horse?”

The young man bent down and picked up the poor cat. “Let her be,” said he. “She is just fine as a cat.”

“Very well,” said the witch, “I’ll just run off and find you one of the enchanted horses from the Stable of the Storm.” And off she went.

People say the witch and the black cat lived happily ever afterward at the bottom of the well. And, they say, when you listen closely on a wild night, you can hear the sound of spirited galloping.