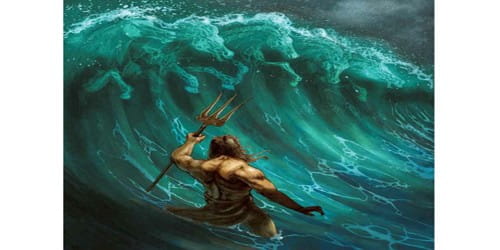 The Chameleon and the Sea God

The Chameleon and the Sea God (A Tale From West Africa)

Once long ago, on an autumn day when the sun shimmered brightly in a blue sky, the sea sighed with pleasure. It kicked up waves as fish tickled its belly and the sun-warmed it’s head. It slapped playfully against the shoreline rocks.

“Ah,” sighed the sea. “I am so happy to be in this world. Best of all, I am the most powerful being in the world.”

The sea gurgled and rippled high upon the shore. “You are not!” it cried. “Everyone knows the sea is more powerful than the sky. I can make waves.”

“And I can roar,” cried the sky. Suddenly the sky grew dark and let out a most ferocious thunderclap. “We shall see who is the most powerful. I am sending a messenger to your god. My messenger will return to tell me just exactly how powerful the sea god is.”

“Send a messenger at once,” bubbled the sea.

The sky carefully considered who to send a messenger. Clouds danced, begging to go to the sea, but the sky roared and huffed. Stars twinkled brightly, calling out, “Choose me, choose me!” The moon rocked and hoped the sky would choose him to go. But the sky had other plans. It chose the chameleon to speak to the sea god.

The chameleon moved as quickly as he could toward the sea god’s watery palace. There Olokun, the god of the sea, ruled all the underwater creatures.

The chameleon was amazed when he saw Olokun’s palace. He wandered through the vast, twisting corridors, gazing at the pearls and coral and jewels that studded the walls. At last, he came to Olokun’s throne, and there he stood, awaiting the sea god.

Soon, Olokun entered the room. He was dressed in a fine robe laced with pearls. He was a proud god and smiled to think what the chameleon would say about his clothes. But when he looked down at the creature, he could not believe his eyes. This was not the lowly messenger he had imagined he would find. The chameleon was dressed in robes as beautiful as Olokun’s. In fact, the chameleon’s robes were exactly like those of the great god!

“Excuse me one moment,” Olokun said and hurried back to his chamber, where he changed into a more beautiful robe. This one was the color of the sea at dawn, with golden threads and shells and bits of colored coral woven through its cloth. Olokun smiled at his reflection. “No one dresses as well as I,” he said to the fish who waited upon him. He returned to the throne room to speak with the chameleon.

When he entered, he could not believe his eyes. There sat the chameleon dressed in exactly the same robes as he. “Wait,” Olokun cried, and again he bustled back to his chamber, where he changed into yet another, even more, beautiful robe.

The fish burbled with delight at the sight of their god. “Surely you are the most magnificent of all,” the fish agreed. Satisfied, Olokun returned to the throne room.

You can imagine Olokun’s amazement and then despair when he saw that the chameleon, too, had changed. Again the chameleon wore a robe exactly like Olokun’s!

At last, Olokun hung his head in shame. “The sky god must be more powerful than I,” he said sadly. “Even his lowly messenger dresses in robes as gorgeous as mine.”

All the other sea creatures sadly nodded in agreement.

And that is why the people of the earth called the sky the greatest power in the world, and the sea, though happy in its earthly paradise, never again challenged the sky.