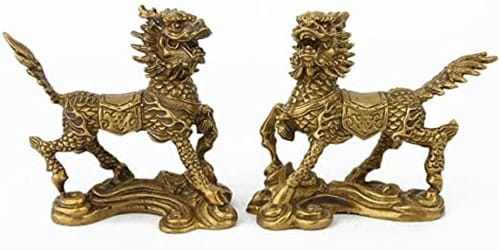 The Chi-Lin’s Gift (A Chinese Legend)

Long ago, the emperor of China, tired of his many duties, decided he would spend a day in the countryside. He walked along the shores of the Yellow River, pleased to have a chance to enjoy the beauty of autumn.

And a beautiful day it was. The sun, high in the sky, glittered down on the green grass and the water flowing peacefully. The emperor smiled, thinking that the sound of the water rippling and the wind dancing through the golden leaves sounded like sweet music. Feeling tired, he stopped to rest beneath the shade of a tree.

The emperor had just begun to doze when he heard a loud splash in the water. He looked up and his mouth and eyes opened wide at the sight before him. A creature rose out of the water.

The emperor stared. “Yes,” he said softly, “it is the chi-lin.” The creature had the body of a sleek, white horse, the legs and hooves of an antelope, a thick, elegant tail like that of a lion. And from the center of its forehead grew a single, twisted, tri-colored horn, white and black and red.

The emperor could barely breathe, for he had heard many tales of the magical creature, but he knew that even emperors seldom chanced to see the chi-lin. The chi-lin was the most beautiful and graceful creature in the world, and the emperor knew its presence before him was a special blessing.

The emperor sat as still as stone. He dared not move. He simply stared, and the chi-lin gazed back at him.

Before long, to the emperor’s astonishment, the chi-lin swam to the shore, stepped out of the water and walked toward him. When it reached the emperor, it bent its legs, lowered its head, and placed its polished horn in his lap.

Still, the emperor dared not move. He looked over the creature’s head, and he saw, all over its back, strange signs. He knew they must mean something important.

For a long while, the creature stayed where it was, and the emperor stared at the signs. He vowed he would remember every curve and whorl.

The day wore on, and still, the creature lay with its horn in the emperor’s lap. The emperor tried to memorize the signs.

And then the wind arose, playing a new song in the leaves. The chi-lin raised its head, turned, and walked gracefully back to the water. There it turned back.

Once the emperor thought he saw the chi-lin open its mouth as if it wished to speak, and he waited, holding his breath, but no sound came. When the emperor had finished writing, he yawned and stretched, for he was suddenly exhausted and struggled to remain awake. “I will never see this creature again. I must stay awake.” But he could not keep his eyes open, and soon he fell into a deep, dreamless sleep.

When the emperor awoke, the sun was setting. The world seemed cast in gold. He walked to the edge of the water, searching for the creature. The chi-lin was gone.

The emperor rubbed his eyes. Surely he had been dreaming, for no one had seen the chi-lin for years. Remembering the signs in the dirt, he closed his eyes and fixed them in his mind. He hurried back to the palace and called his wise men to the courtyard.

“Look at these,” the emperor said, scratching the signs in the fine soil. “Tell me what they are.”

The wise men studied the scrawls, touching the first one character and then another. They retired to their own chambers to ponder the signs. After many days, the wise men returned and gave the emperor their finished work. They had created the first written language of China, born of the chi-lin’s signs.

“Now,” said the emperor, “we shall conquer the world.”

Soon afterward, the emperor and his people began to wage war on the weaker countries that surrounded them. Wise beyond all others, they easily conquered nation after nation.

Every day while waging his wars, the emperor walked to the riverbank. Each day he stood upon the shore and searched for the chi-lin, but he grew sadder and sadder, for the chi-lin never returned. The emperor felt as if his heart were breaking.

Some years later, when he was old, he again called his wise men to his chamber. “Tell me why the chi-lin abandoned me,” he said.

The wise men shook their heads. “The chi-lin is a symbol of perfection,” they said. “You have waged war for many years, creating conflict in the world. The chi-lin will not dwell where there is no peace.”

And so the emperor wept, for he had learned too late the terrible cost of what he had done. The chi-lin’s gift of written language had been used in the service of power and greed, not beauty and peace.