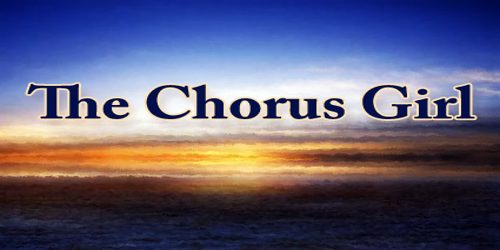 One day when she was younger and better-looking, and when her voice was stronger, Nikolay Petrovitch Kolpakov, her adorer, was sitting in the outer room in her summer villa. It was intolerably hot and stifling. Kolpakov, who had just dined and drunk a whole bottle of inferior port, felt ill-humoured and out of sorts. Both were bored and waiting for the heat of the day to be over in order to go for a walk.

All at once there was a sudden ring at the door. Kolpakov, who was sitting with his coat off, in his slippers, jumped up and looked inquiringly at Pasha.

“It must be the postman or one of the girls,” said the singer.

Kolpakov did not mind being found by the postman or Pasha’s lady friends, but by way of precaution gathered up his clothes and went into the next room, while Pasha ran to open the door. To her great surprise in the doorway stood, not the postman and not a girl friend, but an unknown woman, young and beautiful, who was dressed like a lady, and from all outward signs was one.

The stranger was pale and was breathing heavily as though she had been running up a steep flight of stairs.

The lady did not at once answer. She took a step forward, slowly looked about the room, and sat down in a way that suggested that from fatigue, or perhaps illness, she could not stand; then for a long time her pale lips quivered as she tried in vain to speak.

“Is my husband here?” she asked at last, raising to Pasha her big eyes with their red tear-stained lids.

“Husband?” whispered Pasha, and was suddenly so frightened that her hands and feet turned cold. “What husband?” she repeated, beginning to tremble.

A minute passed in silence. The stranger several times passed her handkerchief over her pale lips and held her breath to stop her inward trembling, while Pasha stood before her motionless, like a post, and looked at her with astonishment and terror.

“So you say he is not here?” the lady asked, this time speaking with a firm voice and smiling oddly.

“You are horrid, mean, vile . . .” the stranger muttered, scanning Pasha with hatred and repulsion. “Yes, yes . . . you are horrid. I am very, very glad that at last I can tell you so!”

Pasha felt that on this lady in black with the angry eyes and white slender fingers she produced the impression of something horrid and unseemly, and she felt ashamed of her chubby red cheeks, the pock-mark on her nose, and the fringe on her forehead, which never could be combed back. And it seemed to her that if she had been thin, and had had no powder on her face and no fringe on her forehead, then she could have disguised the fact that she was not “respectable,” and she would not have felt so frightened and ashamed to stand facing this unknown, mysterious lady.

“Where is my husband?” the lady went on. “Though I don’t care whether he is here or not, but I ought to tell you that the money has been missed, and they are looking for Nikolay Petrovitch. . . . They mean to arrest him. That’s your doing!”

The lady got up and walked about the room in great excitement. Pasha looked at her and was so frightened that she could not understand.

“He’ll be found and arrested today,” said the lady, and she gave a sob, and in that sound could be heard her resentment and vexation. “I know who has brought him to this awful position! Low, horrid creature! Loathsome, mercenary hussy!” The lady’s lips worked and her nose wrinkled up with disgust. “I am helpless, do you hear, you low woman? . . . I am helpless; you are stronger than I am, but there is One to defend me and my children! God sees all! He is just! He will punish you for every tear I have shed, for all my sleepless nights! The time will come; you will think of me! . . .”

Silence followed again. The lady walked about the room and wrung her hands, while Pasha still gazed blankly at her in amazement, not understanding and expecting something terrible.

“I know nothing about it, madam,” she said, and suddenly burst into tears.

“You are lying!” cried the lady, and her eyes flashed angrily at her. “I know all about it! I’ve known you a long time. I know that for the last month he has been spending every day with you!”

“Yes. What then? What of it? I have a great many visitors, but I don’t force anyone to come. He is free to do as he likes.”

“I tell you they have discovered that money is missing! He has embezzled money at the office! For the sake of such a . . . creature as you, for your sake he has actually committed a crime. Listen,” said the lady in a resolute voice, stopping short, facing Pasha. “You can have no principles; you live simply to do harm that’s your object; but one can’t imagine you have fallen so low that you have no trace of human feeling left! He has a wife, children. . . . If he is condemned and sent into exile we shall starve, the children and I. . . . Understand that! And yet there is a chance of saving him and us from destitution and disgrace. If I take them nine hundred roubles to-day they will let him alone. Only nine hundred roubles!”

“I am not asking you for nine hundred roubles. . . . You have no money, and I don’t want your money. I ask you for something else. . . . Men usually give expensive things to women like you. Only give me back the things my husband has given you!”

“Madam, he has never made me a present of anything!” Pasha wailed, beginning to understand.

“Where is the money? He has squandered his own and mine and other people’s. . . . What has become of it all? Listen, I beg you! I was carried away by indignation and have said a lot of nasty things to you, but I apologize. You must hate me, I know, but if you are capable of sympathy, put yourself in my position! I implore you to give me back the things!”

“H’m!” said Pasha, and she shrugged her shoulders. “I would with pleasure, but God is my witness, he never made me a present of anything. Believe me, on my conscience. However, you are right, though,” said the singer in confusion, “he did bring me two little things. Certainly I will give them back, if you wish it.”

Pasha pulled out one of the drawers in the toilet-table and took out of it a hollow gold bracelet and a thin ring with a ruby in it.

“Here, madam!” she said, handing the visitor these articles.

The lady flushed and her face quivered. She was offended.

“What are you giving me?” she said. “I am not asking for charity, but for what does not belong to you . . . what you have taken advantage of your position to squeeze out of my husband . . . that weak, unhappy man. . . . On Thursday, when I saw you with my husband at the harbour you were wearing expensive brooches and bracelets. So it’s no use your playing the innocent lamb to me! I ask you for the last time: will you give me the things, or not?”

“You are a queer one, upon my word,” said Pasha, beginning to feel offended. “I assure you that, except the bracelet and this little ring, I’ve never seen a thing from your Nikolay Petrovitch. He brings me nothing but sweet cakes.”

“Sweet cakes!” laughed the stranger. “At home the children have nothing to eat, and here you have sweet cakes. You absolutely refuse to restore the presents?”

Receiving no answer, the lady sat, down and stared into space, pondering.

“What’s to be done now?” she said. “If I don’t get nine hundred roubles, he is ruined, and the children and I am ruined, too. Shall I kill this low woman or go down on my knees to her?”

The lady pressed her handkerchief to her face and broke into sobs.

Pasha imagined little children standing in the street, crying with hunger, and she, too, sobbed.

“What can I do, madam?” she said. “You say that I am a low woman and that I have ruined Nikolay Petrovitch, and I assure you . . . before God Almighty, I have had nothing from him whatever. . . . There is only one girl in our chorus who has a rich admirer; all the rest of us live from hand to mouth on bread and kvass. Nikolay Petrovitch is a highly educated, refined gentleman, so I’ve made him welcome. We are bound to make gentlemen welcome.”

Pasha shrieked with horror and waved her hands. She felt that this pale, beautiful lady who expressed herself so grandly, as though she were on the stage, really might go down on her knees to her, simply from pride, from grandeur, to exalt herself and humiliate the chorus girl.

“Very well, I will give you things!” said Pasha, wiping her eyes and bustling about. “By all means. Only they are not from Nikolay Petrovitch. . . . I got these from other gentlemen. As you please. . . .”

Pasha pulled out the upper drawer of the chest, took out a diamond brooch, a coral necklace, some rings and bracelets, and gave them all to the lady.

“Take them if you like, only I’ve never had anything from your husband. Take them and grow rich,” Pasha went on, offended at the threat to go down on her knees. “And if you are a lady . . . his lawful wife, you should keep him to yourself. I should think so! I did not ask him to come; he came of himself.”

Through her tears the lady scrutinized the articles given her and said:

“This isn’t everything. . . . There won’t be five hundred roubles’ worth here.”

Pasha impulsively flung out of the chest a gold watch, a cigar-case and studs, and said, flinging up her hands:

The visitor gave a sigh, with trembling hands twisted the things up in her handkerchief, and went out without uttering a word, without even nodding her head.

The door from the next room opened and Kolpakov walked in. He was pale and kept shaking his head nervously, as though he had swallowed something very bitter; tears were glistening in his eyes.

“What presents did you make me?” Pasha asked, pouncing upon him. “When did you, allow me to ask you?”

“I am asking you, what presents did you make me?” Pasha cried.

He clutched his head in his hands and moaned.

He rapidly dressed, and pushing Pasha aside contemptuously, made for the door and went out.

Pasha lay down and began wailing aloud. She was already regretting her things which she had given away so impulsively, and her feelings were hurt. She remembered how three years ago a merchant had beaten her for no sort of reason, and she wailed more loudly than ever.