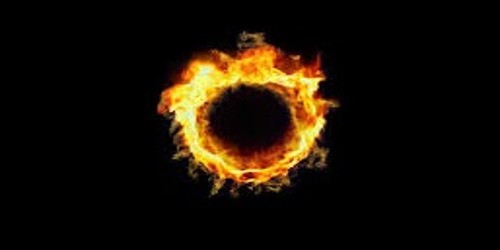 Long ago, as the northern winds began to howl, the animals of the forest started to prepare for winter. They gathered food and covered their shelters with leaves and logs. Their fur grew thick and long.

That year winter came quickly and in a fury. The winds roared like fierce dragons, and the sky, dark as slate, seemed to move closer to the earth. The animals shivered and could not find warmth, and so, at last, they gathered together to see what they could do.

“We’ll build a great fire,” Black Bear announced, and everyone agreed this was a fine idea. So the animals gathered all the wood they could find and built a blazing fire. Then they sat in a circle around it, huddling close, grateful for the warmth of one another and for the heat of the flames.

One by one the animals tossed logs onto the fire, and the fire roared and grew higher and hotter. As the fire pitched heat from its center, Black Bear stared into the flames.

Heron stared too, and so did Fox and Wolf, Coyote and Moose, Grizzly Bear and Sheep.

Days passed and the wind did not let up, and the pine trees grew icy fingers. Time went on this way.

“We’ll have to toss our last logs on the fire,” Wolf said, for he was almost always first to speak.

“You toss yours first,” Moose grumbled. Moose did not like Wolf and didn’t want to waste his last log on his enemy.

Wolf shook his head and looked across the circle, staring into Moose’s eyes. He said nothing, but his heart grew hard and cold, and he knew he would never help a creature so ugly and gangly as his enemy Moose.

“Throw your log on the fire, Grizzly,” Wolf called to the bear who sat nearby.

Grizzly Bear growled and looked around the circle at those gathered. When his eyes caught Black Bear’s eyes, he clutched his log to his chest. “I say Black Bear should be first to toss his log,” Grizzly said. “I’m stronger and better than he is.”

Black Bear narrowed his eyes and felt a growl rising deep in his chest. “Toss my log on this fire to warm you?” he asked Grizzly, and then smiled to think his enemy might freeze to death. “I’ll never waste my log on the likes of you. What about Coyote there? He has a log.”

All the animals gazed at Coyote.

Coyote paid no attention to Black Bear’s request, for he was busy watching Sheep, who sat across from him. She was shivering even beneath her thick wool coat, and Coyote smacked his lips to think of that lumpy ball of wool frozen and ready for a feast. His stomach was growling with anticipation.

“Coyote?” Moose called. “Are you listening?”

“I don’t think I can help you, friends,” he said, and then licked his lips. “Why don’t we ask Sheep to toss her log?”

“Oh, no,” Sheep said softly. “I think …” but then she stopped, for thinking tired her, and she could not help noticing the way Coyote was staring at her. She knew she could not stand to see him benefit by the heat her log would give. “Perhaps Heron would help,” she said.

Heron craned her neck and peered at Fox, who was grinning from ear to ear. “Fox can toss his log upon the fire. I believe he would be best to toss his first, for he can never be trusted. He might just save his log once we have all tossed ours.”

“Me?” Fox cried. “I wouldn’t fix this fire for a creature like you. I’d never help a heron in distress.”

And so it went, all through the night. One after the other, the animals refused to share their logs, for each one had an enemy, a creature he feared or despised, and none of them wished to save the other.

A few more days passed, but no one tossed a log onto the fire, and soon the fire was nearly ash.

And then, suddenly, a great roar shook the forest. The animals all turned to try to find the source of the sound, but they saw nothing. “What is it?” they asked each other as the roar sounded again. “What can that be?”

Suddenly the wind rushed past them, and they watched as a towering pine tree crashed to the ground. “Burn me,” the tree called as it fell. “Burn me, my friends, and save yourselves. But you must learn that if you allow anger and hatred to rule your actions, you will destroy yourselves.”