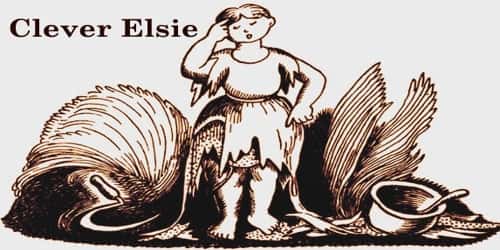 There was once a man who had a daughter who was called Clever Elsie. And when she had grown up her father said: ‘We will get her married.’ ‘Yes,’ said the mother, ‘if only someone would come who would have her.’ At length a man came from a distance and wooed her, who was called Hans; but he stipulated that Clever Elsie should be really smart. ‘Oh,’ said the father, ‘she has plenty of good sense’; and the mother said: ‘Oh, she can see the wind coming up the street, and hear the flies coughing.’ ‘Well,’ said Hans, ‘if she is not really smart, I won’t have her.’ When they were sitting at dinner and had eaten, the mother said: ‘Elsie, go into the cellar and fetch some beer.’ Then Clever Elsie took the pitcher from the wall, went into the cellar, and tapped the lid briskly as she went so that the time might not appear long. When she was below she fetched herself a chair, and set it before the barrel so that she had no need to stop, and did not hurt her back or do herself any unexpected injury. Then she placed the can before her and turned the tap, and while the beer was running she would not let her eyes be idle but looked up at the wall, and after much peering here and there, saw a pick-ax exactly above her, which the masons had accidentally left there.

After Hans had had her some time, he said: ‘Wife, I am going out to work and earn some money for us; go into the field and cut the corn that we may have some bread.’ ‘Yes, dear Hans, I will do that.’ After Hans had gone away, she cooked herself some good broth and took it into the field with her. When she came to the field she said to herself: ‘What shall I do; shall I cut first, or shall I eat first? Oh, I will eat first.’ Then she drank her cup of broth and when she was fully satisfied, she once more said: ‘What shall I do? Shall I cut first, or shall I sleep first? I will sleep first.’ Then she lay down among the corn and fell asleep. Hans had been at home for a long time, but Elsie did not come; then said he: ‘What a clever Elsie I have; she is so industrious that she does not even come home to eat.’ But when evening came and she still stayed away, Hans went out to see what she had cut, but nothing was cut, and she was lying among the corn asleep. Then Hans hastened home and brought a fowler’s net with little bells and hung it round about her, and she still went on sleeping. Then he ran home, shut the house-door, and sat down in his chair and worked. At length, when it was quite dark, Clever Elsie awoke and when she got up there was a jingling all round about her, and the bells rang at each step which she took. Then she was alarmed, and became uncertain whether she really was Clever Elsie or not, and said: ‘Is it I, or is it not I?’ But she knew not what answer to make to this, and stood for a time in doubt; at length, she thought: ‘I will go home and ask if it is I, or if it is not I, they will be sure to know.’ She ran to the door of her own house, but it was shut; then she knocked at the window and cried: ‘Hans is Elsie within?’ ‘Yes,’ answered Hans, ‘she is within.’ Hereupon she was terrified, and said: ‘Ah, heavens! Then it is not I,’ and went to another door; but when the people heard the jingling of the bells they would not open it, and she could get in nowhere. Then she ran out of the village, and no one has seen her since.