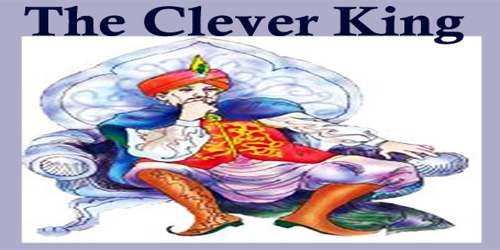 Once upon a time, a boy named Lars lived with his sister. She worked all day long, cooking and cleaning and harvesting the fields. Lars never helped her. He was a talented trickster, but he was not much good at other things. At long last, his sister said to him: “I’ve struggled long and hard. It’s time you helped me out. For this new year, you must go out and earn some money.”

Lars was a good-tempered lad, and he agreed to go. He headed straight for the king’s palace.

Now this king was a vain and foolish man who believed no one could do anything better than he. He had heard of Lars and his tricks, and when he saw him lazing outside, he called to him and said: “Lad, I’ve heard you’re a fine trickster. See if you can play a trick on me.” The king was certain no one could possibly trick him.

“I’d like to very much,” said Lars, “but I’ve left my bag of tricks at home, and I couldn’t walk so far as that to fetch it.”

“Ah, that would be fine,” said Lars, “except I have no saddle, and I’m far too tired to mount the horse.”

“Very well,” said Lars, yawning. And so the king did just that, and Lars rode away. When he reached the town, he sold both horse and saddle.

The king waited for Lars’ return, and when he realized he had been tricked, he was furious. He decided he would punish the lad, and so he went to Lars’ house.

But Lars had expected just this, and he was well-prepared. He boiled a big pot of water on the fire. When he heard the sound of the king’s horses coming near, he took the pot off the fire and placed it on the floor. Then he stirred in porridge, and he was stirring when the king arrived.

When the king saw the boiling water and the porridge cooking, he was amazed. “How does water boil in a pot on the floor?” he asked.

“I want that pot,” the king said. “I’ll forgive your stealing my horse and saddle if you sell me that pot.”

But the king begged and pleaded, offering more and more gold, and at last, Lars agreed.

The king returned to the palace, eager to show off his magical pot. He invited many guests to a feast. He filled the pot with water and beef and vegetables, preparing to make a big stew. He began to stir.

Of course nothing happened. The stew did not boil. And after a while the king’s guests began to laugh at him. “Looks like you’ve been tricked,” they said.

Now the king was even angrier, and again he set off to punish Lars. When he arrived at the house, he stomped inside and said, “You’ll pay for making me seem a fool!”

“What is my punishment?” asked Lars lazily.

“Come with me to the palace,” the king said, and he set his servants upon Lars.

“No need to force me,” Lars said calmly. “I’ll come along and take my due.”

When they returned to the palace, the king commanded his servants to put Lars in a barrel. Lars crawled in with no complaint.

“You will lie in this barrel for three long days,” the king said. “You’ll lie in it at the top of the mountain, and there you’ll think about your tricks. At the end of three days, I shall roll you down the mountain into the sea. You’ll be sorry you ever tried to trick the king.”

“Very well,” Lars said, and he lay still as the servants carried him to the top of the mountain. For two days he lay there, and all the while he sang out happily, “To paradise I go, to paradise I go!”

While he was singing, a rich miser walked by and heard him. “What are you doing in that barrel, lad?” the man asked.

“I’m being sent to paradise,” Lars answered. “The king himself is sending me there.”

“Oh, but I want to go to paradise,” the miser said. “Please, change places with me.”

“Why would I do that?” Lars answered. “I’m eager to see paradise myself.”

“Very well,” Lars said, “just pry open the barrel, then.” And so the man did. Lars crawled out, and the miser paid him handsomely and crawled into the barrel.

But to the king’s amazement, when he returned to the palace, who should he see but Lars standing outside the gates. This time the lad was dressed in fine new clothes.

“What’s this?” the king cried. “How did you get here? I pushed you into the sea myself. I watched the barrel sink. And where did you get all that finery?”

“At the bottom of the sea, sire,” Lars answered. “The king of the sea himself paid me handsomely. And you should see his kingdom, gleaming with gold and silver. It shimmers like nothing on earth. He’s far, far wealthier than you, and he’s a generous man. Whoever visits him, he pays handsomely.”

“All you have to do is roll down in a barrel,” Lars answered. “And since you sent me on the journey, I’ll return the favor if you like.”

So the king and Lars returned to the top of the mountain. Lars sealed the king in a barrel and rolled him into the sea, and when the king was gone, Lars returned to the palace. He invited his sister to come to live with him, and there they lived happily and well. Lars became king. He proved to be a good and kind ruler, and no one ever called him a trickster again. Instead, they called him the clever king.