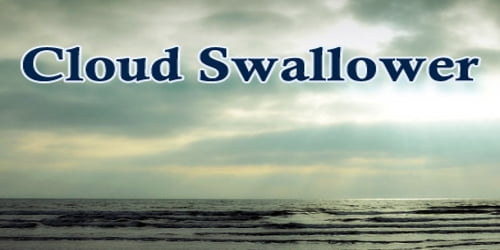 Once upon a time in the mountains above a village in the dry and dusty Southwest, there lived a giant who loved to swallow clouds. The people below feared and despised him because whenever he saw a cloud pass overhead, he reached up and caught it and squeezed all the moisture into his mouth.

“We must stop Cloud Swallower,” all the people agreed, and so they sent, one by one, their strongest young men to the mountaintop to confront him. Sadly, not one young man returned, and gradually the people realized that Cloud Swallower meant to destroy them.

At long last two young men, twins decided they must find some way to stop Cloud Swallower. “We need to trick him somehow,” said one of the twins.

The other agreed. “We must talk to the animals. They will know what to do.”

The twins knew that the animals had much wisdom to offer. And so they sought the wisdom of the animals, and Grandmother Spider at once offered assistance. “The giant Cloud Swallower has many tricks,” she said, “and I have seen them all. I have sat at the top of the mountain and watched him, but I am so tiny, he has never spotted me.”

“Tell us his tricks,” said the twins.

Grandmother Spider loved to spin stories as well as webs, and she told the twins of the way the giant would sit upon his mountain and pretend to sleep. “But he is only pretending,” Grandmother Spider explained. “He tells the people to pass beneath his legs, which he rests over the mountain trail, and as soon as someone passes beneath him, he closes his legs and catches them. Sometimes he eats them, and sometimes he tosses them over the cliff, but always he is playing tricks. You cannot trust a word he says.”

“I’ll gladly help you,” said Grandmother Spider, “for I do not wish to see the people and the animals and the land destroyed.”

And so, the twins, carrying their clubs and with Grandmother Spider riding on the shoulder of one, set off for the mountain. Once they had reached the base, they began to climb.

“Stay far behind me,” Grandmother Spider told the boys. “Wait until I have tricked Cloud Swallower.”

The twins slowed their pace, and Grandmother Spider scuttled ahead to the top of the mountain, where she reached the giant.

There he lay, as large as she remembered him. His torso filled the mountaintop, and his huge legs lay over the trail. His eyes were closed, but Grandmother knew he could smell the twins coming. She knew he was only pretending to sleep.

She climbed up on a rock behind his resting head, and then she sailed down upon a slender thread of silk she spun until she was directly over his forehead. There she began to weave an elaborate web, and when she had finished it, she laid it upon the giant’s face, ear to ear.

Now the twins reached the top, and when they came near Cloud Swallower, they called out, “Is this the home of the giant who drinks all the people’s water?”

“It is indeed!” Cloud Swallower rumbled.

“We want you to stop swallowing clouds,” said the twins.

“No problem,” said the giant, and he let out an enormous yawn. “I am too old and tired to care what you people do. I just want to lie here and sleep from this day on.”

That, the twins knew, was what the giant always said.

“Very well,” said the twins, “can we pass through this way?”

“Of course,” the giant said, and again he yawned a gusty yawn. “Just pass beneath my legs.”

Again the twins were ready, and so they said, “We will,” and one of the twins ran to the right, and the other twin ran to the left, and the giant, confused by the sound of many running feet, sat up and tried to open his eyes. Alas, he could not, for the spider web blinded him.

“Where have you gone, boys?” the giant called, as he pulled and pulled at the sticky web that stuck to his eyelids. “Just pass under my legs as I said.”

“We are doing just that,” the boys called, and the giant reached out to snatch them, but because he could not see, he grabbed only air. He turned and reached in another direction, and again he grabbed only air, and while he was turning this way and that, the boys ran to his head and struck him with their clubs. When he was unconscious, they gathered all their strength and pushed him off the side of the mountain.

Once the giant was gone, the clouds again passed overhead, and the rain fell, watering the crops and land and filling the streams. And again the harvest grew rich, and the people were satisfied with their bounty.

Afterward, the people called the twins the Hero Twins. They praised the wise Grandmother Spider and celebrated the rain that gave them life.