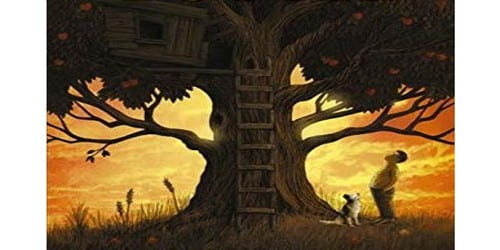 Connor and True (A Tale Told Around the World)

Once upon a time, a young man named True huddled in his drafty little cottage all winter long, listening to the sounds of laughter and joy coming from his neighbor Connor’s home. Poor True took work whenever he could find it, but times were hard. That winter he was very poor and hungry.

When spring arrived, True picked up his sack and set off down the road, hoping he would find some work.

True smiled when he inhaled the scent of springtime buds, and as he was gazing at the bright blue sky, his neighbor Connor happened to pass by.

“Oh my,” said Connor when he saw his neighbor’s tattered clothing and his pale skin. “You look terrible, True. You look as if the world had ended.”

True smiled a thin smile. “Oh no,” he said and looked up at the lilac blossoms. “No, the world here is just beginning.”

“What’s become of the bloom in your cheek, old friend?” Connor asked. “Perhaps you have not eaten well?”

True shivered as he remembered the howling winds and blistering cold of those hungry nights. “I did not go out much this winter,” True said but would say nothing more. Truly did not like to complain of his troubles, for he was well aware that many others in the world suffered far more than he. He was thankful for his little cottage and for his health.

“What a shame you did not join our celebrations,” Connor said. “Look at me! I spent the winter feasting and celebrating. Nothing like a hearty stew during a storm or a nice big slab of beef on an icy evening.”

“That sounds pleasant,” True said, though he did feel envious as he listened to Connor’s tale. He blushed with shame at his envy and hid his face from Connor. He did not wish to bring any more discontent into the world. There was quite enough of that, he believed.

“Come with me,” said Connor in a booming voice. “I’ll take you for something fine to eat, and we’ll bring the bloom back to your cheeks.”

True’s mouth began to water at the thought of a hearty meal. “I suppose it wouldn’t hurt to take a bite to eat,” True said, “though I don’t have much to spend.”

They set off together for the village. In the village square, Connor led True to a crowded restaurant. The room inside was bright with light and the sound of people singing and feasting. The aroma of fine food nearly made True swoon. The tables were laden with meats and soups, with cakes and confections.

The two men sat at a table. Connor called to the waiter. “Bring us some of everything you have. Bring stew and biscuits with butter, bring sweets and honey and cider. Bring everything good that you have!”

The waiter happily obliged. “This is a man who knows how to enjoy life,” the waiter thought, though he wondered about Connor’s pale companion. “The other is a sad man,” the waiter said to himself, “but perhaps a good meal will cheer him.”

The waiter worked hard to please the two men, and after the first course, True’s cheeks bloomed red. “I’ve made you smile, sir?” the waiter asked True.

True’s heart was stirred by the boy’s words. “You’ve been very kind,” he said, and True’s gratitude made the waiter happy.

At long last, when Connor and True had eaten their fill, the waiter brought the bill to the table. When he saw the bill, Connor stood and shouted to the proprietor, “This young man is cheating us! He has brought us a second bill. I already gave him money! I want my change!”

“But sir,” the poor waiter protested, “that is not so.”

True stood and placed his hand on the waiter’s shoulder. “My friend has not paid,” True told the proprietor. “He is being dishonest.”

The waiter and True shared a smile.

“Ah-ha!” the proprietor cried when he saw the two men smile. “You must be a pair of tricksters!”

The proprietor turned to Connor and bowed. “I am sorry, sir. I can see that my waiter was trying to cheat you. The meal is on the house, and this waiter is fired.”

Connor thanked the proprietor and walked outside. True chased after him. “How could you hurt an innocent young man that way?”

Connor laughed. “Don’t you see, that’s the way of the world. I’ve filled my belly and my pockets too, and if only you would learn, you would never go hungry again.”

Just at that moment, the waiter ran out of the restaurant. “Please,” the waiter said, touching True’s sleeve. “I would like to go into the world with you. I seek justice and truth, and you are obviously a man who knows both.”

True and the waiter set off together. Now, if you must know, they had hard times, but their friendship was as pure and fine as gold. They were always surrounded by friends and loved ones who looked after them when they were hungry or ill or cold. They lived long and happily.

And as for Connor? His belly and pockets were always full, but he never had a single true friend, and when at last he died, he died alone.