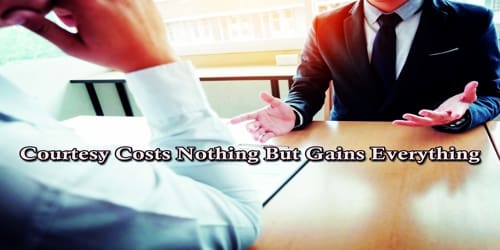 Courtesy Costs Nothing But Gains Everything

Once a gentleman advertised for an office boy and received sixty applications for the post. He asked them all to appear for an interview. All the applicants came to be interviewed. The gentleman interviewed them patiently and chose one who had no testimonial or recommendations with him. Then the other applicant’s grew suspicious. They started to talk against the gentleman. They raised questions about his honesty. They thought that the gentleman had been bribed and was not a gentleman at all. They discussed among themselves to go to the police station. Some suggested that they should go to the local media and inform the reporters of it. Then one candidate stood up and asked them to go to a lawyer and file a lawsuit against the man. They were very depressed.

In the end, they went to a lawyer and told him the whole thing. The lawyer was very wise. He understood all the matter very quickly and also became curious. He gave the man a phone call. After introducing himself he notified him all in detail. The gentleman laughed and told him to come with all the candidates to his house the next evening. All the candidates went as they were invited along with the lawyer. They were asked to be seated in a big room. When the gentleman appeared, they spoke about their complaint and showed that they were highly displeased with him as he did not consider their testimonials or recommendations. The man replied that he had chosen the best candidate among themselves. He also informed them they were poor in manners in spite of having high recommendations. They could not prove their merit as much as the boy who was chosen for the post. He proved himself courteous when he entered the room taking the permission of the interview board. Then he gently closed the door and went forward and seated himself after he was told to do so. He answered all the queries satisfactorily and all through his interview he was very meek and humble. When he went out he closed the door gently. All these proved his quality which the others lacked though they had recommendations and testimonials. There is a wise saying that the action proves your qualification.