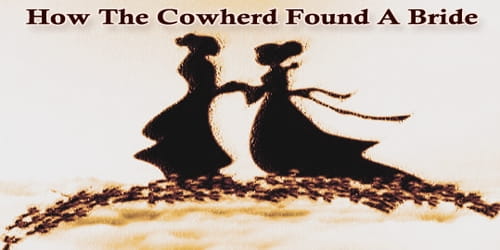 How The Cowherd Found A Bride

There was once a Goala who was in charge of a herd of cattle and every day he used to bring the herd for their midday rest to the foot of a peepul tree. One day the peepul tree spoke and said to him “If you pour milk every day at my roots I will grant you a boon.”

So thenceforward the Goala every day poured milk at the roots of the tree and after some days he saw a crack in the ground; he thought that the roots of the tree were cracking the earth but the fact was that a snake was buried there, and as it increased in size from drinking the milk it cracked the ground and one day it issued forth; at the sight of it the Goala was filled with fear and made sure that the snake would devour him. But the snake said, “Do not fear: I was shut up in the nether world, and you by your kindness have rescued me, I wish to show gratitude to you and will confer on you any boon for which you ask.”

The Goala answered that the snake should choose what he would give him; then the snake called him near and breathed on his hair which was very long and it became glistening like gold, and the snake said that his hair would obtain for him a wife and that he would be very powerful; and that whatever he said would come to pass. The Goala asked what sort of things would come to pass. The snake answered “If you say a man shall die he will die and if you say he shall come to life, he will come to life. But you must not tell this to anyone; not even to your wife when you marry; if you do the power will vanish.”

Some time afterward it happened that the Goala was bathing in the river; and as he bathed one of his hairs came out and the fancy took him to wrap it in a leaf and set it to float down the stream. Lower down the river a princess was bathing with her attendants and they saw the packet come floating down and tried to stop it but it floated straight to the princess and she caught it and opened it and found the hair inside. It shone like gold and when they measured it, it was twelve fathoms long.

So the princess tied it up in her cloth and went home and shut herself up in her room, and would neither eat nor drink nor speak. Her mother sent two of her companions to question her, and at last she told them that she would not rise and eat until they found the person to whom the golden hair belonged; if it were the hair of a man he should be her husband and if it came from a girl she would have that girl come and live with her.

When the Raja and Rani heard this and that the hair had come floating down the river they went to their daughter and told her that they would at once send messengers up the stream to find the owner of the hair. Then she was comforted and rose up and ate her rice. That very day the Raja ordered messengers to follow up the banks of the stream and enquire in all the villages and question everyone they met to find trace of the owner of the golden hair; so the messengers set out on both banks of the stream and followed it to its source but their search was vain and they returned without news; then holy mendicants were sent out to search and they also returned unsuccessfully.

Then the princess said, “If you cannot find the owner of the golden hair I will hang myself!” At this a tame crow and a parrot which were chained to a perch, said “You will never be able to find the man with the golden hair; he is in the depths of the forest; if he had lived in a village you would have found him, but as it is we alone can fetch him; unfasten our chains and we will go in search of him.” So the Raja ordered them to be unfastened and gave them a good meal before starting, for they could not carry a bag of provisions with them like a man. Then the crow and the parrot mounted into the air and flew away up the river, and after a long search, they spied the Goala in the jungle resting his cattle under the peepul tree; so they flew down and perched on the peepul tree and consulted how they could lure him away. The parrot said that he was afraid to go near the cattle and proposed that the crow should fly down and carry off the Goala’s flute, from where it was lying with his stick and wrapper at the foot of the tree.

So the crow went flitting from one cow to another till it suddenly pounced on the flute and carried it off in its beak; when the Goala saw this he ran after the crow to recover his flute and the crow tempted him on by just fluttering from tree to tree and the Goala kept following; and when the crow was tired the parrot took the flute from him and so between them they drew the Goala on right to the Raja’s city, and they flew into the palace and the Goala followed them in, and they flew to the room in which the princess was and dropped the flute into the hand of the princess and the Goala followed and the door was shut upon him. The Goala asked the princess to give him the flute and she said that she would give it to him if he promised to marry her and not otherwise. He asked how he could marry her all of a sudden when they had never been betrothed; but the princess said “We have been betrothed for a long time; do you remember one day tying a hair up in a leaf and setting it to float downstream; well that hair has been the go-between which arranged our betrothal.” Then the Goala remembered how the snake had told him that his hair would find him a wife and he asked to see the hair which the princess had found, so she brought it out and they found that it was like his, as long and as bright; then he said “We belong to each other” and the princess called for the door to be opened and brought the Goala to her father and mother and told them that her heart’s desire was fulfilled and that if they did not allow the wedding to take place in the palace she would run away with the Goala.

So a day was fixed for the wedding and invitations were issued and it duly took place. The Goala soon became so much in love with his bride that he forgot all about his herd of cattle which he had left behind, without anyone to look after them; but after some time he bethought himself of them and he told his bride that he must return to his cattle, whether she came with him or no. She said that she would take leave of her parents and go with him; then the Raja gave them a farewell feast and he made over to the Goala half his kingdom, and gave him a son’s share of his elephants and horses and flocks and herds and said to him “You are free to do as you like: you can stay here or go to your own home; but if you elect to stay here, I shall never turn you out.” The Goala considered and said that he would live with his father-in-law but that he must anyhow go and see the cattle which he had abandoned without anyone to look after them.

So the next day he and his wife set off and when they got to the jungle they found that all the cattle were lying dead. At this the Goala was filled with grief and began to weep; then he remembered the promise of the snake that he should be able to restore the dead to life and he resolved to put it to the test.

So he told his wife that he would give the dead cows medicine and he got some jungle roots as a blind and held them to the noses of the dead animals and as he did so, he said “Come to life” and, behold, one by one the cows all got up and began flowing to their calves.

Having thus proved the promises of the snake the Goala was loud in his gratitude and he filled a large vessel with milk and poured it all out at the foot of the peepul tree and the snake came and breathed on the hair of the princess and it too became bright as gold.

The next day they collected all the cows and drove them back to the princess’ home and there the Goala and his wife lived happily, ruling half the kingdom. And some years after the Goala reflected that the snake was to him as his father and mother and yet he had come away in a hurry without taking a proper farewell, so he went to see whether it was still there; but he could not find it and he asked the peepul tree and no answer came so he had to return home disappointed.