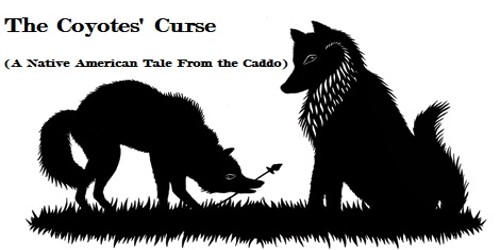 The Coyotes’ Curse (A Native American Tale From the Caddo)

When the world began, death did not exist. Everyone lived forever. As time passed, more and more people and animals shared the Earth, and they grew restless and longed for more space. They grumbled and worried until, at last, the chiefs decided they must hold a council.

Each tribe sent the chief to attend the council. They talked about many possibilities for solving their problem. They even talked of death, but no one wanted to think of losing their loved ones. And so, after many days, the chiefs agreed to a plan.

All the chiefs agreed this was a fine idea. All agreed, that is, except one. The chief of the coyotes stood and said, “I think those who die should go away forever. The world is not large enough for everyone to stay forever. If those who die return, they will eat all the food, and there will be none left for the coyotes.” The coyotes were always eager to find food.

The other chiefs shook their heads and sighed at the coyote’s words. “We do not wish to see our friends and loved ones go away forever,” one of the chiefs said.

“It is a good idea to take turns. Each of us will take a turn,” another said.

Still a third stood and added, “This world would be too sad if no one returned. All our happiness would vanish.”

And so it was decided. People would go away for a little while, and later they would return to life. The chief of the coyotes howled his dismay, but the others set to work to prepare for their plan.

The chiefs directed the medicine men to build a large grass house facing the setting sun. When the house was completed, all the men and women and children and animals gathered near the house. The chiefs stood outside the house, raised their hands, and prepared to announce their plan.

“When someone dies, his friends and loved ones will bring him to the medicine house,” the chiefs announced. “Here the medicine men will give those who have died some medicine, and after a while, they will be restored to life. While we wait for their return, we will sing a song, calling the spirits of those who have died to come to the grass house. When the spirit arrives, the body will once again be alive.”

The people were happy, for no one wanted to go away forever.

A few days later, the first man died, and his family carried his body to the grass house. Inside, the medicine men gathered. They opened the door to the house, looked toward the west, and began to sing their song, calling the man’s spirit to the house.

The medicine men sang for many days, calling to the winds of the west where the spirits journeyed. At last, in the far west, a great whirlwind, in which the man’s spirit traveled, heard the song. The whirlwind rose and began to spin toward the grass house, toward the sound of the song.

As the medicine men sang, the people gathered around, waiting eagerly for the sight of the healing whirlwind. Only the coyotes stood apart.

The chief of the coyotes looked at his people and shook his head. He knew what he would do. He ran toward the west, raced to the top of a hill and searched for the sight of the whirlwind. When he saw it coming, he raised his head to the wind and called, “Stop!”

The whirlwind ignored the chief coyote. It whirled faster, swirling and spinning, moving toward the sound of the song of life.

The coyote, seeing that the whirlwind ignored his command, turned and ran as fast as he could toward the house. He was just ahead of the whirlwind, running with all his strength. When he reached the house, the whirlwind at his tail, he closed the door.

When the whirlwind discovered that the door was closed, it rushed past the grass house.

The people, watching the whirlwind race past, began to weep and shout angrily, “Coyote, you have made death last forever.”

They sat around the grass house, crying over the loss of their loved one, and the medicine men shook their heads and stopped singing their song.

Ever since that time, death has been eternal, and whenever anyone hears the sound of the whirlwind’s whistle, he knows that someone’s spirit is wandering about the countryside, searching for somewhere to go. They wander until they reach the road to the spirit land.

The coyotes, knowing that the people were angry, ran to the hills and never returned to live among others. Ever since that day, the coyotes have been hungry, for no one offers them food or shelter.

*The Caddo Indians were planters who lived in large, dome-shaped, thatched grass huts. Coronado mentions this tribe in his expedition notes. They were once scattered throughout Oklahoma, Arkansas and northern Texas, but today a very few have settled with the Wichitas in Oklahoma.