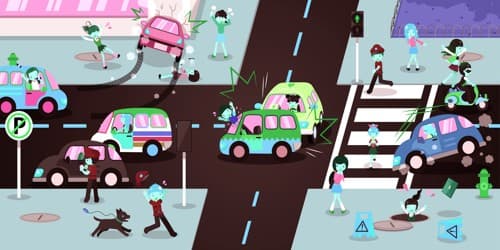 Dangers on the Road

Dangers on the Road

We live in a society where cars are everywhere, there are more cars on the road nowadays than ever before. The roads of today are choked with cars, lorries, motorcycles and other vehicles. The inevitable result of this congestion is the increase in the number of road accidents. Every day many road users get injured or killed. It is wise to know what they are and how to avoid them. With the rates of injuries and fatalities caused by vehicles continuously increasing.

It is said that these days, more people die of accidents on the roads than of any diseases. In towns and cities where the congestion is the greatest, pedestrians are the ones with the highest risks. To be hit by a vehicle almost certainly means injury or death. So when crossing the streets, it is always better to use the pedestrian crossings that are usually located at junctions, regardless of whether the crossings have light or not. Some drivers are more cautious than others, while some like to text or drink alcohol. There are some drivers who do not stop at pedestrian crossings. Cross only when you know it is safe to do so, not because the light is green for you. If there are overhead pedestrian bridges, better still. Use them even though it might be a bit inconvenient. Some of the accidents on the roads take place because of the mechanical failure of vehicles. But in most cases, the fault lies with human beings who drive these vehicles.

Accidents occurring along the highways are frequently fatal. Sometimes entire families are wiped out in a single accident. The vehicles are reduced to unrecognizable mangled heaps of metal. It is common to read about how the fire department “took an hour to remove the bodies from the wreckage”. Do not speed on the road. This is the lesson to be learned.

One major aspect of road safety is intersections, where the possibility of collisions is very high. Despite the horror, many road users have not learned the lesson. They continue to speed and behave recklessly. This is especially so with young motorcyclists. With their devil-may-care attitude and their illegal midnight races, they not only endanger themselves but other road users as well.

When on the road, know the dangers and avoid them. In the first instance, do not endanger other road users with irresponsible behavior such as jaywalking, using the mobile phone while driving and beating red lights. Irresponsible road users are the greatest danger on the road. Do not let yourself be one. Whatever the reason, rash driving should be avoided at all costs.