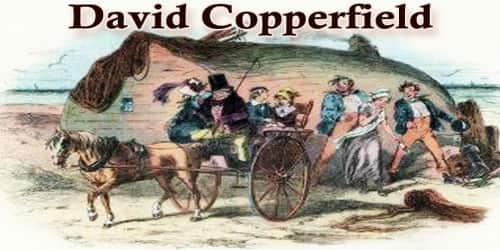 David Copperfield was born in a village in England. His father had died six months before he was born. David’s mother looked after him well. He was sent to the best school in the village.

He was in a boarding school for two years, when he got the news that his mother had died. He hurried home to find his stepfather seated on a chair, glaring at him. Murdstone said, “Your mother is dead; I have no money to fund for your education; you have to start earning. Tomorrow you will leave for London.”

So, at the age of ten, David Copperfield was in the streets of London with no money, food or shelter. He remembered his mother having told him that in Dover lived his aunt, his father’s sister. David had never seen her. He walked to Dover to his aunt’s house.

It was morning by the time David reached his aunt’s house. Her name was Miss Trotwood. She was in the garden when she saw a ragged boy looking at her. She asked, “What is it, boy? What do you want?” David said, “I am David Copperfield, your nephew.” He told her everything. Miss Trotwood took David inside, gave him a hot water bath and some food.

As days went by, Miss Trotwood put David in a good school and looked after him fondly. Miss Trotwood had a friend, Wickerden, when had a daughter Agnes. David and Agnes became great friends.

Wickerden was a rich lawyer; he had a habit of drinking every night before he went to sleep. His assistant, Micawber, was a dishonest man. He would get valuable documents signed by Wickerden in his drunken state.

David would often visit the Wickerden house. One day David happened to see Micawber getting some papers signed by Wickerden. He did not trust Micawber. He asked to see the documents. Micawber said, “David, these papers are related to work and would make no sense to you.” But, David insisted.

When David saw the papers, he realized that Micawber was getting documents signed that would make him a partner in Wickerden’s firm. David had Micawber arrested for deception.

Wickerden was happy that David had caught the dishonest Micawber. Agnes too thanked David for saving her father from ruin.

A few years later David and Agnes, who were in love with each other, were married. They lived happily for a long time.