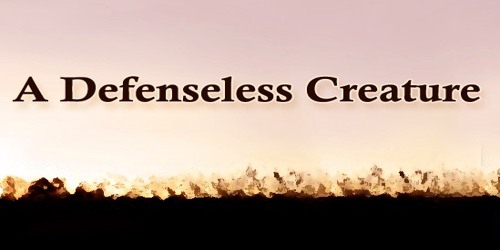 In spite of a violent attack of gout in the night and the nervous exhaustion left by it, Kistunov went in the morning to his office and began punctually seeing the clients of the bank and persons who had come with petitions. He looked languid and exhausted, and spoke in a faint voice hardly above a whisper, as though he were dying.

“What can I do for you?” he asked a lady in an antediluvian mantle, whose back view was extremely suggestive of a huge dung-beetle.

“You see, your Excellency,” the petitioner in question began, speaking rapidly, “my husband Shtchukin, a collegiate assessor, was ill for five months, and while he, if you will excuse my saying so, was laid up at home, he was for no sort of reason dismissed, your Excellency; and when I went for his salary they deducted if you please, your Excellency, twenty-four roubles thirty-six kopecks from his salary. ‘What for?’ I asked. ‘He borrowed from the club fund,’ they told me, ‘and the other clerks had stood security for him.’ How was that? How could he have borrowed it without my consent? It’s impossible, your Excellency. What’s the reason of it? I am a poor woman; I earn my bread by taking in lodgers. I am a weak, defenseless woman . . . I have to put up with ill-usage from everyone and never hear a kind word. . .”

The petitioner was blinking and dived into her mantle for her handkerchief. Kistunov took her petition from her and began reading it.

“Excuse me, what’s this?” he asked, shrugging his shoulders. “I can make nothing of it. Evidently you have come to the wrong place, madam. Your petition has nothing to do with us at all. You will have to apply to the department in which your husband was employed.”

“Why, my dear sir, I have been to five places already, and they would not even take the petition anywhere,” said Madame Shtchukin. “I’d quite lost my head, but, thank goodness God bless him for it, my son-in-law, Boris Matveyitch, advised me to come to you. ‘You go to Mr. Kistunov, mamma: he is an influential man, he can do anything for you. . . .’ Help me, your Excellency!”

“We can do nothing for you, Madame Shtchukin. You must understand: your husband served in the Army Medical Department, and our establishment is a purely private commercial undertaking, a bank. Surely you must understand that!”

Kistunov shrugged his shoulders again and turned to a gentleman in a military uniform, with a swollen face.

“Your Excellency,” piped Madame Shtchukin in a pitiful voice, “I have the doctor’s certificate that my husband was ill! Here it is, if you will kindly look at it.”

“Very good, I believe you,” Kistunov said irritably, “but I repeat it has nothing to do with us. It’s queer and positively absurd! Surely your husband must know where you are to apply?”

“He knows nothing, your Excellency. He keeps on: ‘It’s not your business! Getaway!’ that’s all I can get out of him. . . . Whose business is it, then? It’s I have to keep them all!”

Kistunov again turned to Madame Shtchukin and began explaining to her the difference between the Army Medical Department and a private bank. She listened attentively, nodded in token of assent, and said:

“Ough!” sighed Kistunov, letting his head drop back. “There’s no making you see reason. Do understand that to apply to us with such a petition is as strange as to send in a petition concerning divorce, for instance, to a chemist’s or to the Assaying Board. You have not been paid your due, but what have we to do with it?”

“Your Excellency, make me remember you in my prayers for the rest of my days, have pity on alone, lorn woman,” wailed Madame Shtchukin; “I am a weak, defenceless woman. . . . I am worried to death, I’ve to settle with the lodgers and see to my husband’s affairs and fly round looking after the house, and I am going to church every day this week, and my son-in-law is out of a job. . . . I might as well not eat or drink. . . . I can scarcely keep on my feet. . . . I haven’t slept all night. . . .”

Kistunov was conscious of the palpitation of his heart. With a face of anguish, pressing his hand on his heart, he began explaining to Madame Shtchukin again, but his voice failed him.

“No, excuse me, I cannot talk to you,” he said with a wave of his hand. “My head’s going round. You are hindering us and wasting your time. Ough! Alexey Nikolaitch,” he said, addressing one of his clerks, “please will you explain to Madame Shtchukin?”

“I am a weak, defenseless woman, I am a woman in delicate health,” said Madame Shtchukin. “I look strong, but if you were to overhaul me there is not one healthy fibre in me. I can scarcely keep on my feet, and my appetite is gone. . . . I drank my cup of coffee this morning without the slightest relish. . . .”

Alexey Nikolaitch explained to her the difference between the departments and the complicated system of sending in papers. He was soon exhausted, and his place was taken by the accountant.

“A wonderfully disagreeable woman!” said Kistunov, revolted, nervously cracking his fingers and continually going to the decanter of water. “She’s a perfect idiot! She’s worn me out and she’ll exhaust them, the nasty creature! Ough!… My heart is throbbing.”

Half an hour later he rang his bell. Alexey Nikolaitch made his appearance.

“We can’t make her see anything, Pyotr Alexandritch! We are simply done. We talk of one thing and she talks of something else.”

“Send for the porter, Pyotr Alexandritch, let him put her out.”

“No, no,” cried Kistunov in alarm. “She will set up a squeal, and there are lots of flats in this building, and goodness knows what they would think of us. . . . Do try and explain to her, my dear fellow. . . .”

“A minute later the deep drone of Alexey Nikolaitch’s voice was audible again. A quarter of an hour passed, and instead of his bass there was the murmur of the accountant’s powerful tenor.”

“Re-mark-ably nasty woman,” Kistunov thought indignantly, nervously shrugging his shoulders. “No more brains than a sheep. I believe that’s a twinge of the gout again. . . . My migraine is coming back. . . .”

In the next room Alexey Nikolaitch, at the end of his resources, at last, tapped his finger on the table and then on his own forehead.

“The fact of the matter is you haven’t ahead on your shoulders,” he said, “but this.”

And looking at her with fury, with exasperation, as though he would devour her, Alexey Nikolaitch said in a quiet, stifled voice:

“Wha-at?” squealed Madame Shtchukin. “How dare you? I am a weak, defenceless woman; I won’t endure it. My husband is a collegiate assessor. You screw!… I will go to Dmitri Karlitch, the lawyer, and there will be nothing left of you! I’ve had the law of three lodgers, and I will make you flop down at my feet for your saucy words! I’ll go to your general. Your Excellency, your Excellency!”

“Be off, you pest,” hissed Alexey Nikolaitch.

Kistunov opened his door and looked into the office.

“What is it?” he asked in a tearful voice.

Madame Shtchukin, as red as a crab, was standing in the middle of the room, rolling her eyes and prodding the air with her fingers. The bank clerks were standing round red in the face too, and, evidently harassed, were looking at each other distractedly.

“Your Excellency,” cried Madame Shtchukin, pouncing upon Kistunov. “Here, this man, he here . . . this man . . .” (she pointed to Alexey Nikolaitch) “tapped himself on the forehead and then tapped the table. . . . You told him to go into my case, and he’s jeering at me! I am a weak, defenceless woman. . . . My husband is a collegiate assessor, and I am a major’s daughter myself!”

“And when shall I get the money, your Excellency? I need it to-day!”

Kistunov passed his trembling hand over his forehead, heaved a sigh, and began explaining again.

“Madam, I have told you already this is a bank, a private commercial establishment. . . . What do you want of us? And do understand that you are hindering us.”

Madame Shtchukin listened to him and sighed.

“To be sure, to be sure,” she assented. “Only, your Excellency, do me the kindness, make me pray for you for the rest of my life, be a father, protect me! If a medical certificate is not enough I can produce an affidavit from the police. . . . Tell them to give me the money.”

Everything began swimming before Kistunov’s eyes. He breathed out all the air in his lungs in a prolonged sigh and sank helpless on a chair.

“How much do you want?” he asked in a weak voice.

Kistunov took his pocket-book out of his pocket, extracted a twenty-five rouble note and gave it to Madame Shtchukin.

Madame Shtchukin wrapped the money up in her handkerchief, put it away, and pursing up her face into a sweet, mincing, even coquettish smile, asked:

“Your Excellency, and would it be possible for my husband to get a post again?”

When he had driven home Alexey Nikolaitch sent Nikita for some laurel drops, and, after taking twenty drops each, all the clerks set to work, while Madame Shtchukin stayed another two hours in the vestibule, talking to the porter and waiting for Kistunov to return. . . . She came again the next day.