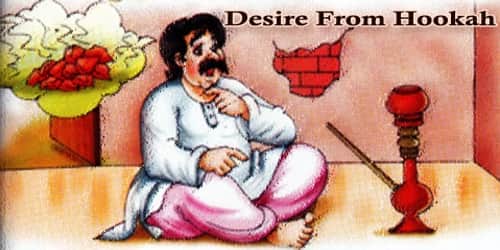 Long ago, there lived a farmer in a village. His name was Ramu. He was all alone and had no family. He was fond of hookah or hubble-bubble (a kind of long pipe for smoking). Better say, he was much addicted to it.

One night, Ramu’s desire for Hookah became so intense that he could not sleep. He tried his best but the desire for hookah made him restless. So he got up and put tobacco in the chilam (the container at the top of a hookah). Thereafter, he made a thorough search for some burning coal to be put into the chilam but there was no fire in the kitchen. Finding no other alternative, he went to his neighbor. It was mid-night and most people had gone to bed. He knocked at the door of his neighbor. The neighbor was surprised to see Ramu at the door so late in night. He asked, “What happened? Is there an emergency?”

Ramu was unable to speak clearly yet spoke hesitatingly, “The…..the….the desire for Hookah brought me here”

He continued, “There was no fire in my kitchen, therefore I have come to you. Please give me some burning coal so that I can put into the pot of the tobacco.”

Now the neighbor laughed and said, “You have your lantern (oil lamp) and with the help of its fire you can easily burn coal. But without thinking, you came here.”

Ramu realized his mistake and felt embarrassed for his folly.

The neighbor further said, “It is typical human nature. Although they have something in hand, they tend to search for it everywhere. This is one of the biggest stupidities inherent in them.”