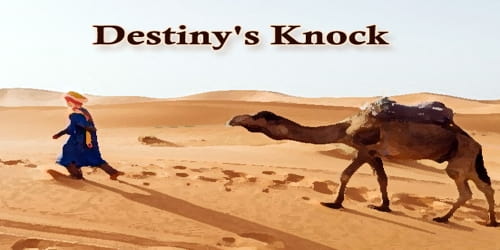 Long long ago there was a beautiful palace in the middle of the Baghdad city. The building was surrounded by beautiful orchards. Music playing created a soothing atmosphere. The palace was so attractive that whoever saw it could not help praising its beauty. There was no other building equivalent to it in beauty and splendor in Baghdad.

One day, a poor man happened to come to the palace. He was surprised to see the beauty of the building. He thought, ‘The building appears very beautiful from outside, it must be much more attractive from inside. But how can I see the interior of the palace?’ He was shabbily dressed and therefore was hesitating to enter. Right then, he observed that some people were going inside. He thought, “Why can’t I go inside with these people?” He decided to enter thinking that nobody will pinpoint him in the midst of the crowd. So he ran to join the crowd. At the gate, he saw the owner welcoming the guests and asking them, “I hope you did not have to face any difficulty in reaching here?” All of them thanked him for his cooperation in their business and expressed their gratitude to him. Thereafter, he took them to the auditorium and discussed with them various issues regarding business.

The poor man did not go in front of the owner. He hid behind a pillar. He heard their conversation and concluded that the owner was very rich.

After some time the poor man went to see the other part of the building. He was stunned to see that even the dogs were eating in golden plates. When fresh meat was served to a dog, it did not touch it. It looked towards the poor man as if it was inviting him to eat the meat. The poor man ate the meat to his satisfaction and thought, ‘Should I take the golden plate.’ He continued to think, ‘In case I get this plate, I can start my business and can become rich.’ But he was afraid of the dog which might bite him if he picked up the golden plate. He peeped into the eyes of the dog and found only kindness and sympathy in them. He picked up the golden plate and as he had anticipated, the dog remained still.

He came out stealthily without being noticed by others. When he had come out, he thought, ‘Now I should not live in Baghdad. It would be dangerous to live here. I will live in a small town to start my business there.’

So he settled in another city, started the business and soon became rich. His bad days were over. He had never thought of earning so much and becoming rich. He once thought, ‘Though I have become rich, I am under the debt of the owner of that beautiful building. I must pay his debt back.’ So he loaded a lot of valuable things on camels and proceeded towards Baghdad. On reaching there, he straightway went to the owner of the splendid building. But he was surprised to see the ruins instead of that beautiful palace. He made a thorough search for the owner of the house.

After some time, he saw an old man who was taking the round of the ruined building. He quickly went to him and said, “There used to be a beautiful palace. Could you tell me something about the building and its owner?” The old man said, “Yes, you are right. But that beautiful building has now turned to ruins. Nobody knows which turn destiny will take.” The businessman said, “I want to meet the owner of the building. I have to repay his debt. Do you know him and his whereabouts?”

The old man replied, “I am the owner of the building. But I am unable to collect if I have ever lent a loan to anyone. What debt are you talking about?”

At this, the businessman narrated all that had happened with him a few years back when he had stolen the golden plate and how he had stolen the golden plate and how he had started his business. He further said, “I earned a lot of money and profit. I have brought some presents for you and request you to accept them.” But the old man refused to accept the presents on the ground that it was the dog that had shown mercy to the man. So the presents could not be accepted. The businessman again said, “Your arguments are strange. The dog was yours and the gold plate was yours.” But the old man said, “No, I am not selfish. I will not accept anything from you.” Saying this, the old man entered the building.

The businessman felt sorry for the pitiable condition of the old man who was once very rich. He thought, ‘The man had lost a golden opportunity to restart his business. Actually, fate had offered him the chance and knocked at his door, as it knocks once in everyone’s life.’