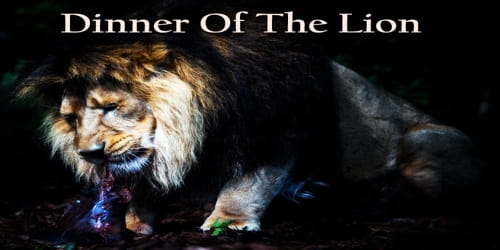 Dinner Of The Lion

There was one place in the Seven Hills which the animals liked very much. There were good water and green grass. But a strong lion lived there. He killed two or three animals every day.

One day the animals came to the Lion and one of them began to speak, “Oh, dear Lion, it is not good for you to run and hunt all day long in the Seven Hills. We’ll send you one animal for your dinner every day.”

“All right,” the Lion said, “but you must begin to send me my dinner now. I am hungry. I must have my dinner every day! If you don’t send an animal to me every day, I shall kill as many of you as I want!”

“Don’t kill us, dear Lion. We shall send you an animal every day.”

They cast lots and that day it was an antelope that became Lion’s dinner. And every day they sent one animal to the Lion.

But the animals were not happy. Each of them thought, “Oh, tomorrow my turn will come!”

One day it was a Hare’s turn to be Lion’s dinner. But the Hare was not unhappy. He smiled! “That’s good, very good?” the hare said. “Don’t be afraid! The Lion will not eat me up!”

The Hare ran to the river, jumped into the water and then began to roll in the mud. He came to the Lion very dirty.

The Lion saw him and became angry. “But I don’t want that dirty animal for my dinner,” he cried. “Oh, dear Lion, I am not your dinner. I had to bring your big hair. But on my way, I met another lion and he took the hare for himself.”

“Is there another lion in the Seven Hills?” asked the Lion.

“Yes, there is. He is big and strong. I think he is stronger than you are.”

The Lion became angrier than before and said to the Hare, “Show me that lion!”

And they went to a big well. The Hare looked into the well and said, “Look, he is there and the Hare is with him.”

The animals were happy. They jumped and danced and thanked the clever Hare.