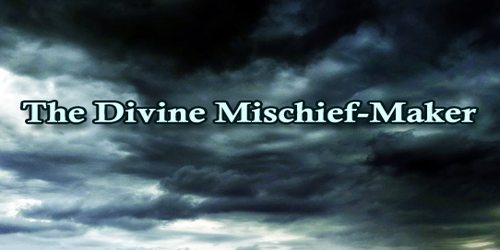 Of all the gods on Mount Olympus, Hermes was the most playful. Son of Zeus, the king of the gods, and of Maia, a Titan’s daughter, Hermes was born in a deep, dark cave on Mount Cyllene.

On the very day of his birth, the fourth day of the month, his mischief-making began.

Still wrapped in swaddling clothes and lying in a winnowing basket, Hermes waited until his mother was fast asleep. Then he opened his eyes, which sparkled with that gleam of mischief-makers. He quietly climbed out of his basket and somehow god that he was managed to travel all the way to Thessaly, where his brother, Apollo, was shepherd in charge of a great herd of white cows.

Apollo, busily pursuing romance, had neglected his duties and was not watching over the herd. Hermes decided he would steal them. He walked among the herd and selected a dozen cows, 100 heifers and one great white bull.

Knowing he must sneak away, he came up with a brilliant plan. First, he wrapped the cows’ hooves in sheaves of bark. “This is how I shall cover your tracks,” he whispered to them as he worked. He chuckled to himself at his next thought. He gathered branches from a nearby forest, and these he tied to the cows’ tails. “Now you will sweep away whatever tracks you may leave,” he explained, and the cows seemed to understand.

Now he was prepared to sneak away, but Hermes had yet another trick up his sleeve. To confuse his brother even more, he drove the cows backward out of the pasture, and he wrapped his own tiny feet with large branches. “My brother will think a giant has led something into the pasture, but he won’t realize that someone has driven anything away.” He laughed as he headed back toward Mount Cyllene, the cattle trailing behind him.

Some say no one saw him as he traveled, though others say that one old man, Battus, did spy the boy. But not believing what he saw, Battus rubbed his eyes and fell asleep, and so this amazing child managed the theft.

Back home, Hermes hid the cattle in a quiet grove, but first, he sacrificed two cows to the 12 gods. Using their bones and sinew, and an empty tortoiseshell, he fashioned a musical instrument with his tiny hands. He smiled to himself when his creation was complete and began to pluck at the strings. The sound, the music of the first lyre, was so beautiful, the clouds danced with joy and the trees trembled. Hermes knew he would charm all who heard it.

Pleased with his night’s work, Hermes hurried back to the cave and crawled into his basket, where he pretended to be fast asleep.

Maia was not fooled. She knew that her son, somehow though he was but a baby – had been up to mischief. She stood over him and watched as he pretended to sleep, and she could not help but smile. Hermes was always to be that way, bringing a smile to those around him.

At dawn, Apollo stormed into the cave. Some say Battus told him of the theft, though Apollo claimed the oracles had told him. He went at once to little Hermes’ basket and cried, “Give me my cows!”

Hermes looked up at him, his eyes wide. “But I’m just a baby. I couldn’t steal a cow.”

Apollo was furious. “I’ll punish you for this,” he raged, and Hermes leaped from his crib and began to run, Apollo fast on his heels.

When the other gods saw this sight, they burst out laughing. “Look at the great god Apollo chasing a baby,” they laughed, but Apollo cried, “This little boy is no ordinary creature. He’s stolen my cows.” And then Apollo raged to his father, Zeus: “Father, he must return them to me. Tell him so!”

Now Zeus was not pleased with the theft, but even he could not help but smile at the mischief caused by this amazing little lad. Still, he wished his sons to love each other, and so he commanded Hermes to return the cows.

Hermes bowed his head before his father, the greatest god of all. “I will, Father,” he said, and with that, he stopped running and beckoned his brother to follow him. Back in the pasture on Mount Cyllene, Apollo sighed at the sight of his herd, and he forgave his young brother.

But a moment later he noticed two of the creatures were missing. “Where have you hidden them?” he cried, anger rising, but Hermes quickly showed his brother the lyre. “Forgive me, brother, but I have made this of them,” and before Apollo could say another word, Hermes began to play.

Apollo was instantly spellbound and forgot his anger. “I will give you these cows,” he said, “if you will give me the lyre.”

And so the brothers came to love each other, and from that day on they often exchanged gifts and wisdom. Hermes never again stole, and the gods praised him for his wit and courage. Zeus made him the herald of the gods, placing upon his head a golden hat with wings. Upon his feet, Hermes wore a pair of golden-winged sandals, and across his shoulders, a cape. “You may hide your magic tricks inside this cape,” Zeus chuckled to the lad.

As the years passed, Hermes became a favorite of all the gods, and of men, too, for he often was the protector of heroes, guiding many to safety and comfort – but always with a gleam in his mischievous eye.