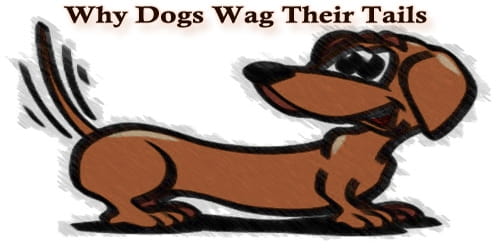 Why Dogs Wag Their Tails

Long long ago in a village, there lived a rich man who lived in a big house with only a dog and a cat. His wife had died and his only daughter lives some miles away in the city to pursue her studies. The man was very fond of her girl and once every week, he used to send a present to her through the dog and the cat.

But the dog was very old. It had lost all its teeth and was incapable of fighting. The cat, however, was strong. It was also very cunning. Together, they were a force and could help the other. The cat could use its intelligence to protect itself and the dog, while the dog knew how to find the way as its senses were still powerful. So the man sent them together on errands like these.

One day, he wished to send a magic ring to his daughter and who better to carry it to her than his faithful pets? He sent the dog and the cat to take her the ring. He told the cat,

“Take this magic ring to my daughter, but be sure to take very great care of it. Prudent that you are, see that nobody manages to steal it away from you two.”

“Meow!” the cat uttered, as if in agreement with his master’s words.

He told the dog,

“You should lead the cat to my daughter. Take care not to lose the way, and see that no one messes with the cat.”

The animals set out immediately. They traveled for some distance until they were near a wide and deep river. There was no bridge over this river or any boat to help them cross over easily. They had to swim across it.

“Give me the magic ring.” the dog said to the cat, “You are not very good at swimming, and may lose the ring, while I am strong and can take good care of it.”

“Oh, no,” replied the cat. “Did you not hear the master say just what each of us had to do?”

They argued for some time until the dog lost its patience and threatened to kill the cat unless it submitted the ring in his custody. The cat reluctantly put the ring down from its mouth and the dog picked it up with its lips.

Then they began to swim across the river, but the current was very strong and the two animals had to struggle a lot to get themselves over to the other side. After an hour of swimming, they were very tired and weak and decided to rest on the bank for a while when suddenly the cat let out a scream and asked the dog in a frightened voice

“Where is the ring? I don’t see it in your mouth?”

The dog was equally shocked and remembered that it had opened his mouth now and then to gasp for breath while swimming.

“It must have fallen out into the waters then.” said the dog.

“We can’t find it out in any way,” said the cat, and suggested to the dog that they should better go back and inform their master about the unhappy turn of events.

“Yes,” answered the dog, “but I am very much afraid to face our master.”

They turned back towards home, but as they drew near the house the dog became more and more fearful about the possible consequences of his actions. He ran away as fast as he could and was never seen again.

The cat went back alone and informed him how the dog had lost the ring and had run away out of fear.

The master became very angry and promised to punish the dog by cutting off its tail if he ever found it again. He called everyone he knew and asked them to find him his dog, in return for an attractive reward.

He himself set out on a world tour, looking for his fugitive pet. Whenever he came by any dog, he asked it “Are you my old toothless dog who lost my magic ring? If you are, your tail must be cut off.” Immediately the dog showed its teeth and wagged its tails to mean no. This became a habit with every dog and it is also from that time that cats became afraid of water, and will never swim across a river if it can be avoided.