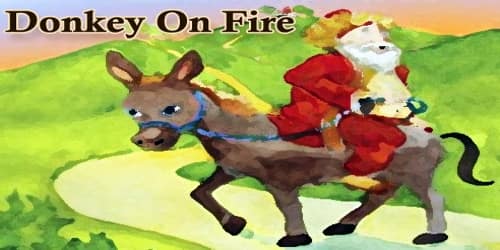 One day the Hodja collected sprigs and twigs in the woods and tied them into a bundle. He was going to use them as firewood in his home. After he finished loading his donkey, he started to doubt if these useless branches were going to burn well. He decided to try, just a tiny corner of the bundle on the donkey’s back.

But as soon as he lit the match, the sprigs caught fire, and with the help of the blowing wind, the entire batch started to burn on the back of the poor donkey. The unfortunate animal, frightened, started to run away. Nasreddin Hodja, feeling terribly guilty, though he should give the pitiable creature a little advice:

“If I were you,” he yelled from behind, “I would run towards the lake.”