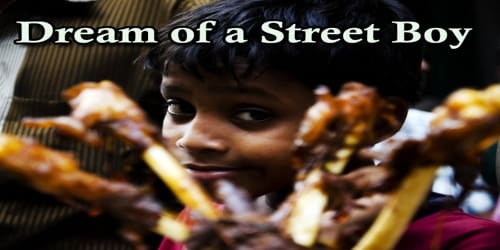 Dream of a Street Boy

Himel saw him every day. A little slip of a boy. He wouldn’t be more than 10 years but he looked smaller from years of undernourishment. In ragged half-torn shorts, he looked hardly eight. He must have been quite fair but layers of dirt and grime turned his skin almost dark brown. His name was Shafiq and he lived in a small makeshift hut with two older boys. The original shades of fair skin could, however, be detected in places. With large dark eyes, he could have been a pretty child under proper care. “Ten taka, sir. Give me ten taka only.” Himel and his friends were very familiar with this voice. Whenever they sat down on the stairs of the Medical College after their classes, he would come running.

Today Himel and his friends were in a good mood. “Hey, You! Come here.” They started asking him questions. What came out was quite pathetic. He did not know where his parents were; neither did he remember them very well. Left on the Streets of Dhaka to fend for himself, he lived with two older boys in a makeshift hut. How many Square meals a day? None. A slice of bread bought with begged money, some leftover rice from hospital attendants was all that he lived on. The well of human kindness in Himel swelled up. What a pity! A little unloved, underfed, left on the streets to fend for him. How cruel could life be? What’s your dream? Do you have a dream?” asked Himel. Yes, indeed. Shafiq had dreams like everybody else. But his dreams weren’t very lofty – a plate full of rice, big pieces of chicken and Sweets. Himel and his friends were surprised. “Is that all? Come on. I am going to make your dream true”, said Himel. Shafiq could not believe his ears. Was he making fun of him?

Playing a cruel trick? No, he was not. In ten minutes Shafiq round himself seated on the bench of a small cafe behind the Medical College with bowls full of rice, beef and chicken curry spread in front of him. “Aha! Aha!” was all Shafiq could say between delightful gulps or rice and meat going down his throat. This could not be happening. It could not be true; Shafiq eating to his heart’s content, sitting in a restaurant among respectable people.