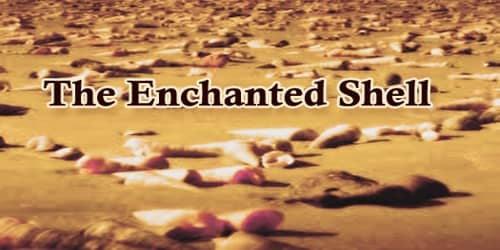 Once upon a time, there was a young married couple who lived in a small village by a big river. The man and his wife were very happy and despite poor means, had no worries except for one. They had no child.

The couple loved children very much. They loved all the children in the village and used to treat them with nice, sugary cakes. But that did not lessen their desire to have a child of their own. Every night they prayed to God that they might have a son, even if he were only like a little shell.

And one day, their prayers were answered. A son was born to them, even though he was very small. The boy was as tiny as a shell, and so his parents named him ‘Shell’.

As Shell grew up, it became clear to his parents that the boy had some growth problems. Even when he became a big man, Shell was still a tiny creature and was only as large as a big shell as one can often find by the seaside. Nonetheless, his parents loved him very much and always made sure that Shell was never unhappy because of his abnormality.

One day Shell went to his mother and told her,

“Mother, can I go and get some food? I am grown up now and it is time I help you and father in managing the house.”

But his mother was afraid that some animal would kill her tiny Shell. So she was would not let him go at first, but when Shell urged her, again and again, she gave him her permission at last and the jolly boy set out.

Shell was always full of mischief and he used this opportunity to play pranks on unsuspecting people. He went to the river, where some women were catching fish and putting them into baskets that they had kept on the grass. Shell crept into one of these baskets and hid among the dead fishes. Very soon, its owner came to pick it and began walking towards her home. All at once Shell began to cry “Rain! Rain!” The woman was utterly frightened for she supposed that the dead fishes were talking. She threw down her basket and ran away. Then Shell came out of the basket, he took it home and gave the fishes to his mother.

The next morning, Shell went out again. This time, he saw an old man walking along the road. In his right hand, he was carrying the head of a cow. The mischievous Shell followed the old man and jumped into the ear of the hanging cow’s head. As the man was passing through a lonely spot, Shell suddenly yelled “Ay! Ay!” The old man gave a start and dropped the cow-head out of fear. He ran away as fast as he could and a smiling Shell came back home and gifted the head to his father.

It was not until his mischiefs were found out that Shell got rebuked by his parents and he began to mend his ways.

One day, Shell told his mother that he had fallen in love with the beautiful daughter of the chief and must have her for his wife. The poor mother was amazed.

“My boy,” she said, “I don’t think he will agree to your proposal.”

But Shell urged her again and again until she was fed up and went to the chief’s house.

“Beg your pardon, my Lord, I have something important to say,” she said to the chief.

“Fear not good woman, what is it that you have to say?” asked the chief.

“Lord, I have come with a marriage proposal. I want your daughter’s hand in marriage for my only son, Shell.”

The chief was astonished but agreed to ask his daughter if she were willing to take Shell for a husband. Imagine his surprise and anger when he found that her daughter was willing to marry him.

“How can you marry Shell? Have you not seen him? Can you be happy with such a man who is not equal to you in any respect?” the enraged father asked his daughter.

But the daughter was ready to have none but Shell as her husband. The angry chief shouted, “I consider you as being lower than my servants. If you marry this Shell I will drive you out of the village.”

But Shell and the girl got married and they left the village to stay in a little house in the fields close by. Cut off from their friends and family, they lived in great hardship for a week. But as that week passed, they started to observe something strange. The tiny Shell began to turn into a good-looking man. He grew taller and taller until he soon became a tall, robust, handsome young man. His wife was very glad to see such a transformation in her husband.

About this time, a sage visited their house and told them that Shell had been enchanted at his birth by an evil spirit. It was only the love of a good wife that could change him into a perfect man. He advised them to go back to their village and tell everyone about the happenings.

When the chief saw how handsome Shell had become he was very happy. He received them back into his village and Shell lived happily with his parents, his beautiful wife and his newfound beauty.