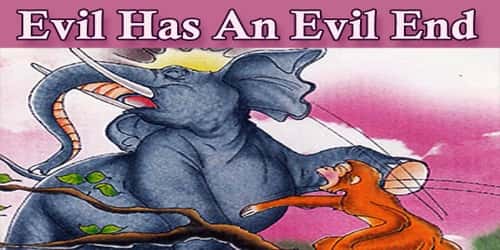 Evil Has An Evil End

There lived a notorious monkey named Cheenu in the Champak forest. He used to harass small and weak animals and birds. Sometimes, he destroyed the bird’s nests and threw away their eggs. Rabbits were afraid of being scratched by him. He used to twist the tail of jackals. Almost all the animals were afraid of the monkey and wanted to get rid of him. But how could they get rid of the monkey? What should they do?

There was a clever jackal in the same forest. He decided to teach a lesson to Cheenu. He went to the monkey and said, “Your body is very attractive. The golden hair further adds to the beauty of your body, still, one thing is wrong in you.”

The monkey said with surprise, “What is wrong with my body?”

The jackal replied, “Your body is red which does not suit your body. If you do as I tell, your face will shine like the moon.”

The monkey was overjoyed and became restless to know the method to beautify his face and asked excitedly, “Tell me the method quickly to make my face glow.”

The jackal said, “If you eat the swargafal (fruit of heaven), your face will shine like the moon.”

The monkey again asked, “How can I get swargafal?”

The jackal replied, “It lies in the forehead of an elephant. When you see an elephant, hit his forehead with a stone and this way the swargafal will come to his trunk, and when the elephant tries to catch you, quickly take out the swargafal from his trunk.”

The monkey waited for an elephant to pass. After some time, an elephant happened to pass by that route. As soon as he came near, the monkey hit him hard with a stone on his forehead. Blood oozed out from the forehead. The wounded elephant cried at the top of his voice in anger. The whole of the forest trembled in fear. But the foolish monkey thought that the swargafal must have slipped to the trunk of the elephant and hit another stone so that the swargafal may fall out of the trunk immediately. But the second stone made the elephant mad, and he ran in search of the hidden enemy.

Soon he saw the monkey who was coming to him to take the swargafal. Cheenu was determined to approach the elephant for the swargafal which he wanted even at the cost of the elephant’s life.

In his excitement, Cheenu rushed to the elephant. The elephant also ran towards the monkey and caught hold of him with his trunk. In a fit of anger, the elephant threw down Cheenu and trampled him under his feet. The monkey died instantly.

A wave of happiness spread all over the forest. All the animals thanked the elephant for ridding them of the wicked monkey. They also praised the clever jackal.