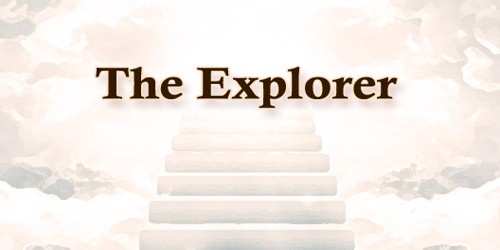 Once upon a time, a wealthy merchant from the village of Chelm traveled to Warsaw. When he returned home, he talked endlessly of his journey, entertaining the people of Chelm with tales of the wondrous city.

After a while, Moishe, a restless poor man, could listen no longer. He was brimming with envy.

“I must see Warsaw myself,” he thought, and from that moment, he could think of nothing else. He could not eat; he could not sleep; he could not speak to his family. All he could do was a dream of the great city of Warsaw.

One morning he awoke and said to his wife, “I am going to Warsaw.” She tried to discourage this crazy plan. “You have no money,” she said, but he told her he would walk.

“You’ll wear out your shoes,” she said, but he told her he would carry them and walk barefoot.

“You’ll exhaust yourself,” she said, but he said he did not care. He packed some food and picked up his shoes and set off.

As he walked, he felt as if he were flying. He was that excited. He did not even notice the stones under his feet. He did not care about the cold wind or about his hunger or the distance he had yet to travel.

After many hours, he reached a fork in the road and decided this was a fine place to eat some food and take a nap.

“But so that I am not confused,” he said to the birds twittering in the trees above him, “I will place my shoes pointing toward the road to Warsaw.”

And that’s exactly what he did. He placed his shoes so that the toes were facing Warsaw. In this way, he knew he would be certain that when he awoke, he would take the right road.

Then he nibbled on his bread and ate his cheese and leaned against a tree and fell asleep.

While he was sleeping, a poor peasant happened past. Seeing the shoes in the road, the peasant stopped.

“Now these would look fine on my feet,” the peasant said and picked them up. But when he saw that the shoes were nearly worn out, he scowled.

“Who needs these?” he said and dropped them. But when he did, they fell so that the toes were facing the road back to Chelm.

When Moishe woke, he smiled at the sight of his shoes.

“What a wise man I am,” he said, “to make sure my toes pointed toward Warsaw.” He picked them up and continued on his journey to the city of wonders.

Before long he quickened his pace, for he could smell bread baking and meat cooking, and he knew he must be near the great city. Soon he entered the city’s outskirts, and he gasped at the sight.

“My, oh my,” he said. “Why, Warsaw looks nothing like I expected it to look. It looks just like my own village of Chelm.”

Still, he went on, for he was certain before long he would come across some marvelous sights. As he walked, he passed a baker who waved and smiled and called “Shalom.” Moishe shook his head.

“My, oh my, if the Warsaw baker doesn’t look exactly like Shlomo, the baker back in Chelm. The wonder of wonders.”

On he walked, and now he passed a bathhouse and was even more surprised.

“If this isn’t the replica of the bathhouse in Chelm,” he exclaimed. Passing more people, he was amazed at the similarities between them and the people of Chelm. Even the synagogue looked exactly like the synagogue in Chelm.

Suddenly he discovered he was on a street that looked very familiar.

“This looks like my road back home,” he said, “and that looks just like my house.” He ambled up to this house and found two children playing in the yard.

“Well, if these children don’t look just like my children,” he said, still more amazed. “How is it that I have walked all the way to Warsaw only to discover that it is exactly like Chelm and the people here exactly like my people?”

At that moment a woman stuck her head out of the window of the house and cried, “Moishe, come inside, dinner is ready.”

Moishe could not believe his eyes and ears. This woman looked exactly like Rachel, his own wife, and still more remarkable, her husband’s name was Moishe.

Shaking his head, he walked inside, and sure enough, the house was furnished just like his house back in Chelm. And there, in a cradle, slept a baby that might have been the twin to his own little Leah.

Moishe sat down at the table and began to feel homesick for his own family, for all this reminded him of home.

And yet, something troubled him. Since Warsaw looked exactly like Chelm, and since this woman and the children and the houses and all the people of Warsaw looked exactly like those back home, he wondered who this Moishe was who owned this house, who was the father to these children, who had married this woman who looked just like his beloved Rachel. He decided he must wait to meet the Moishe who lived here. He wanted to know if this man was exactly like him.

So Moishe is likely waiting there still, for the people of Chelm are very patient, and they will go to any length to learn the truth.