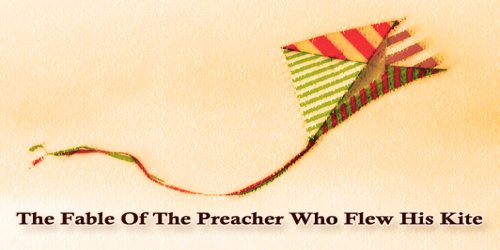 The Fable Of The Preacher Who Flew His Kite

The Fable of the Preacher Who Flew His Kite, But Not Because He Wished to Do So

A certain Preacher became wise to the Fact that he was not making a Hit with his Congregation. The Parishioners did not seem inclined to seek him out after Services and tell him he was a Pansy. He suspected that they were Rapping him on the Quiet.

The Preacher knew there must be something wrong with his Talk. He had been trying to Expound in a clear and straightforward manner, omitting Foreign Quotations, setting up for illustration of his Points such Historical Characters as were familiar to his Hearers, putting the stubby Old English words ahead of the Latin, and rather flying low along the Intellectual Plane of the Aggregation that chipped in to pay his Salary. But the Pew-Holders were not tickled. They could understand everything he said, and they began to think he was Common.

So he studied the Situation and decided that if he wanted to Win them and make everybody believe he was a Nobby and Boss Minister he would have to hand out a little Guff. He fixed it up Good and Plenty.

On the following Sunday morning he got up in the Lookout and read a Text that didn’t mean anything, read from either direction, and then he sized up his Flock with a Dreamy Eye and said: “We can not more adequately voice the Poetry and Mysticism of our Text than in those familiar Lines of the great Icelandic Poet,” Ikon Navrojk:

“To hold is not to have

Under the seared Firmament,

Where Chaos sweeps, and Vast Futurity

Sneers at these puny Aspirations

There is the full Reprisal.”

When the Preacher concluded this Extract from the Well-Known Icelandic Poet he paused and looked downward, breathing heavily through his Nose, like Camille in the Third Act.

A Stout Woman in the Front Row put on her Eye-Glasses and leaned forward so as not to miss anything. A Venerable Harness Dealer over at the Right nodded his Head solemnly. He seemed to recognize the Quotation. Members of the Congregation glanced at one another as if to say: “This is certainly Hot Stuff!”

The Preacher wiped his Brow and said he had no doubt that everyone within the Sound of his Voice remembered what Quarolius had said, following the same Line of Thought. It was Quarolius who disputed the Contention of the great Persian Theologian Ramtazuk, that the Soul in its reaching out after the Unknowable was guided by the Spiritual Genesis of Motive rather than by mere Impulse of Mentality.

The Preacher didn’t know what all this meant, and he didn’t care, but you can rest easy that the Pew-Holders were on in a minute. He talked it off in just the Way that Cyrano talks when he gets Roxane so Dizzy that she nearly falls off the Piazza.

The Parishioners bit their Lower Lips and hungered for more First-Class Language. They had paid their Money for Tall Talk and were prepared to solve any and all styles of Delivery. They held on to the Cushions and seemed to be having a Nice Time.

The Preacher quoted copiously from the Great Poet Amebius. He recited 18 lines of Greek and then said: “How true this is!” And not a Parishioner batted an Eye.

It was Amebius whose Immortal Lines he recited in order to prove the Extreme Error of the Position assumed in the Controversy by the Famous Italian, Polenta.

He had them going, and there wasn’t a thing to it. When he would get tired of faking Philosophy he would quote from a Celebrated Poet of Ecuador or Tasmania or some other Seaport Town. Compared with this Verse, all of which was of the same School as the Icelandic Masterpiece, the most obscure and clouded Passage in Robert Browning was like a Plate-Glass Front in a State Street Candy Store just after the Colored Boy gets through using the Chamois.

After that, he became Eloquent and began to get rid of long Boston Words that hadn’t been used before that Season. He grabbed a rhetorical Roman Candle in each Hand and you couldn’t see him for the Sparks.

After which he sank his Voice to a Whisper and talked about the Birds and the Flowers. Then, although there was no Cue for him to Weep, he shed a few real Tears. And there wasn’t a dry Glove in the church.

After he sat down he could tell by the Scared Look of the People in Front that he had made a Ten-Strike.

Did they give him the Joyous Palm that Day? Sure!

The Stout Lady could not control her Feelings when she told how much the Sermon had helped her. The venerable Harness Dealer said he wished to indorse the Able and Scholarly Criticism of Polenta.

In fact, everyone said the Sermon was Superfine and Dandy. The only thing that worried the Congregation was the Fear that if it wished to retain such a Whale it might have to boost his Salary.

In the Meantime, the Preacher waited for someone to come and ask about Polenta, Amebius, Ramtazuk, Quarolius and the great Icelandic Poet, Navrojk. But no one had the Face to step up and confess his Ignorance of these Celebrities. The Pew-Holders didn’t even admit among themselves that the Preacher had rung in some New Ones. They stood Pat, and merely said it was an Elegant Sermon.

Perceiving that they would stand for anything, the Preacher knew what to do after that.

Moral of the story: “Give the People what they think they want.”