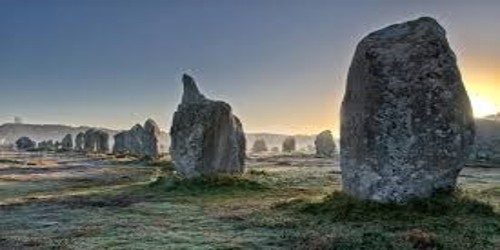 The Fairy Stones of Carnac

The Fairy Stones of Carnac (A Tale From Brittany)

One Christmas Eve, a group of animals were gathered together in their farmer’s barn in Carnac. As the church bells rang out, they began to speak. They spoke every year on Christmas Eve, in honor of the animals in the stable at Bethlehem, but this particular year, they had something special to discuss.

“It has been 100 years,” the horse neighed, “since the stones of Carnac last took their drink. This New Year’s Eve they will go down to the river again.”

The other creatures nodded, for they knew the secret of Carnac, of the enormous granite monuments arranged in groups of 11 parallel rows. The people had heard tales of the fairies. Some said it was the fairies who had built these monuments to cover their vast secret treasures, but most people said this tale was only a myth.

As it happened, one man overheard the animals talking that night. Pere Jacques was the wealthiest landlord in town, a greedy, selfish man. But Pere Jacques was always hoping to have more, and so he hid behind a tree and listened as the animals discussed the stones of Carnac.

The donkey laughed. “Ah, if anyone knew what we know, he would be off to fill his pockets with the fairy gold as soon as the stones leave for their drink.”

“Small good it would do him,” the horse said haughtily. “Unless of course, he carried along a five-leafed clover to protect him from being crushed.”

“You’re forgetting something, aren’t you, horse?” the cat retorted. “He’d also have to take along a man who would die for that gold.”

“True enough,” the horse said, and the creatures went on to talk of other matters.

Well, you can imagine Pere Jacques’ excitement. He spent the next several days searching for a five-leafed clover, and despite the snow, he was successful in his hunt. As soon as he had found his clover, he began to wonder how to find someone willing to die so that he might fill his own pockets with fairy gold.

As he was passing the stones of Carnac, he spied a young farmer named Bernard, who was carving a cross upon one of the enormous stones. “How can you bear the cold, son?” asked Pere Jacques.

Bernard looked up and answered in a voice filled with sadness. “I only thought this holy sign might one day be a comfort to someone.”

Pere Jacques saw the despair in Bernard’s eyes. “And what is it that ails you?” he asked him.

“I love someone with all my heart,” Bernard said softly, “but I am too poor to marry.”

Now, this was precisely the sort of fellow Pere Jacques was seeking. He sat down upon the stone beside the farmer, his greedy heart filled with glee. “I will tell you how to fill your pockets,” Pere Jacques said. And he told Bernard about the secret of the stones. He neglected to mention the fact that someone would have to die, and he failed to share the secret of the clover.

When Bernard heard the story, he could not believe his luck. “You would share your fortune with the likes of me?” he asked. He was amazed by Pere Jacques’ generosity. “I have been told you are a selfish man,” he said, “but I see that people speak unkindly out of envy.”

And so, on New Year’s Eve, Bernard and Pere Jacques met in the darkness at the stones of Carnac. A moment before midnight, the earth began to tremble, and as the clock struck 12, the huge stones rumbled out of the earth and rolled toward the river to take their drink.

Bernard and Pere Jacques were stunned to see the mountains of gold and jewels left in the deep hollow. Pere Jacques began to fill the great sacks he carried. As for Bernard, he simply filled his pockets, for he did not wish to take more than he needed.

Suddenly the earth trembled again, and the stones began to roll uphill, back toward their places.

“Look out,” Bernard cried, terrified at the thundering monsters rolling toward them. Pere Jacques smiled and held up his clover. “I have a magic plant to protect me!”

Hearing this, Bernard covered his face with his hands, and the stones bore down on him. Now he understood he had been tricked, and he cursed. “I will die for my greed,” he groaned. He bowed his head, but as he did, the largest stone of all towered over him but did not fall. The other stones rushed around it, and Bernard, looking up, saw that the stone sheltering him was the one on which he had carved his cross.

When the other stones had returned to their places, this largest stone of all began to move. It passed Bernard and veered toward Pere Jacques who was stumbling along the path, struggling with his heavy sacks of gold. He heard the stone coming. He stopped and held up his clover, but the cross had more power than the tiny clover, and so the stone crushed him and settled into the earth again. It would wait there until another hundred years passed.

Bernard ran to show his beloved his pockets full of gold and to tell the story of the stones.

And that very afternoon, on New Year’s Day not long ago, Bernard married the woman he had always loved, and he shared his gold with all in need. From that day on, no one ever doubted the tale of the fairies’ gold.