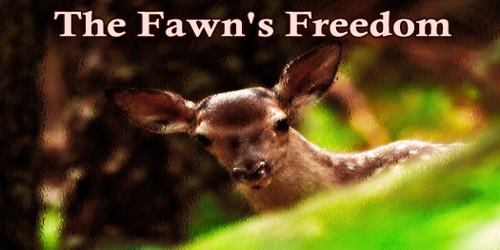 Long ago, in ancient China, the emperor of China, his servants, and his most trusted advisers set out into the forest for a hunt. The hunting party rode great white stallions and the servants wheeled carts laden with the finest food. The royal dogs led the way; the royal falcons also came along.

Everyone in China knew that the emperor loved to hunt, and all the people in the villages who saw him as his hunting party rode past bowed and offered prayers that he might have success and good fortune.

As the emperor and his party were traveling, a little fawn suddenly dashed across their path. Within moments the servants managed to capture the beautiful creature.

The emperor was delighted and bent down to examine the prize. The fawn was so young and so gentle and so afraid, he did not move. He lay as still as stone at the emperor’s feet.

The emperor knelt down beside the fawn, lifted him and held him in his lap, stroking the spotted fur.

“What a gentle fawn,” the emperor said. Again he stroked its velvety fur and gazed into its wide, brown eyes. “He is beautiful, don’t you agree?” He looked up at his servants who nodded. “Yes,” they said. “A beauty indeed.”

“Why,” said the emperor, “this creature is as handsome as my son.”

Once again the servants nodded. “Yes, your majesty,” they said, “the fawn is handsome indeed.”

“I should like my son to have this fellow as a pet,” the emperor said. He looked around at all his servants. Each one nodded.

“I should like one of my servants to go home at once and take this fawn to my young son. He will be delighted.” He looked over his servants and knew exactly whom to choose.

“Chin Li, you take the fawn home,” the emperor said. Chin Li had long worked for the emperor, who knew him to be not only trustworthy but also wise. The emperor knew, too, that his son loved Chin Li.

Chin Li bowed to the emperor, reached down and picked up the fawn. He departed for the palace.

As he was walking, he suddenly heard the sound of wailing behind him. Turning, he saw the fawn’s mother, a stately, proud doe, walking quickly after them, ducking now and then behind a tree.

When Chin Li turned, the fawn looked too, and the creature trembled with joy at the sight of his mother. And then the fawn began to weep.

Chin Li’s heart ached at the sound. He knew that if he set the fawn free, the emperor would punish him, but when he looked down at the poor little creature and saw his brown eyes wet with longing and fear, he knew what he must do.

He set the fawn down on the ground. The moment the creature was free, he ran on wobbly legs toward his mother, and doe and fawn raced into the forest together.

That evening the emperor returned to his palace and called to his wife. “Does my son like his new pet?” he asked.

Before his wife could answer, Chin Li entered the room and bowed low before the emperor and empress. “I set the fawn free,” he said. “His mother wept for him, and I could not bear to see them separated. Your highness, I beg your forgiveness.”

The emperor was furious. “How dare you disobey your emperor’s command,” he said. “You are banished from this palace and from this city. Leave this place by dawn.”

Chin Li nodded. He quietly accepted his punishment. He knew that he had done what he must do, and he knew he would always follow his heart. And at dawn the next day, he walked away from the palace and out of the city.

Many years passed, and the emperor’s son grew tall and strong and curious. The emperor decided he must find his son the best possible teacher. He wanted him to possess great knowledge and wisdom and goodness, for he knew one day his son would be emperor.

He called to his servants and sent them to bring to the palace every teacher they could find.

For days the emperor asked the teachers questions. “What is the most important knowledge a boy can possess?” he asked. Some said poetry and others spoke of mathematics. Others mentioned hunting; some spoke of bravery. Some talked of literature and others of the stars. Several assured the emperor that his child would learn everything they knew. This, they said, would make the emperor’s son wise.

The emperor knew each teacher was knowledgeable, and yet something tugged at his heart and mind. He knew he had to find the best teacher of all. And suddenly the emperor knew just whom he wished to teach his son.

Again he called to his servants. “Go into the countryside and find Chin Li,” the emperor said. “He is the teacher I wish my son to have, for he is kind and wise, and knowledgeable. But most of all, I know he is an empathetic man who cares more for others’ well-being than for his own.”

And so Chin Li returned to the palace to become the emperor’s son’s teacher. He taught the boy all he knew and when the emperor’s son himself became emperor, he ruled the land wisely and with compassion for all his people.