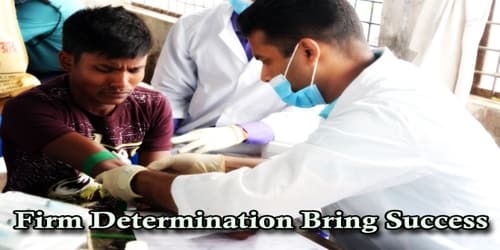 Forhad is a bright student of Dhaka Medical College Hospital (DMC), Bangladesh. But he did not have all the favorable situations in his student life. The economic condition of his family was not good. Moreover, his father died when Forhad was in class ten. Though he was greatly shocked, he continued his study with his firm determination to be a doctor. At first, he had to face some unexpected odd situation. The sudden death of his father made each member of their family very upset. As the whole family was dependent on his father’s income, they had to face the financial crisis for the first time. Now they realized that how Forhad’s father had to manage everything to run the family.

However, Forhad’s mother who was a housewife went to a branch of Grameen Bank where she received some loan and set up a boutique shop and she earned a lump sum profit within a year. Forhad and his family regained their lost hope. Now they had no financial problem. Forhad promised to study attentively so that he could become a doctor. Forhad got A+ in the SSC examination and got himself admitted into Dhaka College. Two years later Forhad got A+ again in the HSC examination. Then he started preparing himself for the admission to a medical college. Fortune favored him and he got the opportunity to get himself admitted into Dhaka Medical College Hospital (DMC). He stood 9th on the merit list in the admission test. Now he is studying there with the hope of being an ideal doctor.