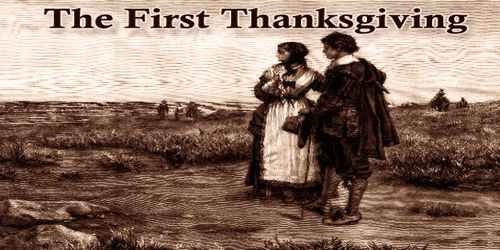 All through the first summer and the early part of autumn, the Pilgrims were busy and happy. They had planted and cared for their first fields of corn. They had found wild strawberries in the meadows, raspberries on the hillsides, and wild grapes in the woods. In the forest just back of the village wild turkeys and deer were easily shot. In the shallow waters of the bay there was plenty of fish, clams, and lobsters.

The summer had been warm, with a good deal of rain and much sunshine; and so when the autumn came there was a fine crop of corn.

“Let us gather the fruits of our first labors and rejoice together,” said Governor Bradford.

“Yes,” said Elder Brewster, “let us take a day upon which we may thank God for all our blessings, and invite to it our Indian friends who have been so kind to us.”

The Pilgrims said that one day was not enough; so they planned to have a celebration for a whole week. This took place most likely in October.

The great Indian chief, Massasoit, came with ninety of his bravest warriors, all gayly dressed in deerskins, feathers, and foxtails, with their faces smeared with red, white, and yellow paint.

As a sign of rank, Massasoit wore round his neck a string of bones and a bag of tobacco. In his belt he carried a long knife. His face was painted red, and his hair was so daubed with oil that Governor Bradford said he “looked greasily.”

Now there were only eleven buildings in the whole of Plymouth village, four log storehouses and seven little log dwelling-houses; so the Indian guests ate and slept out of doors. This was no matter, for it was one of those warm weeks in the season we call Indian summer.

To supply meat for the occasion four men had already been sent out to hunt wild turkeys. They killed enough in one day to last the whole company for almost a week.

Massasoit helped the feast along by sending some of his best hunters into the woods. They killed five deer, which they gave to their paleface friends, that all might have enough to eat.

Under the trees were built long, rude tables on which were piled baked clams, broiled fish, roast turkey, and deer meat.

The young Pilgrim women helped serve the food to the hungry redskins.

Let us remember two of the fair girls who waited on the tables. One was Mary Chilton, who leaped from the boat at Plymouth Rock; the other was Mary Allerton. She lived for seventy-eight years after this first Thanksgiving, and of those who came over in the Mayflower, she was the last to die.

What a merry time everybody had during that week! It may be they joked Governor Bradford about stepping into a deer trap set by the Indians and being jerked up by the leg.

How the women must have laughed as they told about the first Monday morning at Cape Cod when they all went ashore to wash their clothes!

It must have been a big washing, for there had been no chance to do it at sea, so stormy had been the long voyage of sixty-three days. They little thought that Monday would afterward be kept as washday.

Then there was young John Howland, who in mid-ocean fell overboard but was quick enough to catch hold of a trailing rope. Perhaps after dinner, he invited Elizabeth Tilley, whom he afterward married, to sail over to Clarke’s Island and return by moonlight.

With them, it may be, went John Alden and Priscilla Mullins, whose love story is so sweetly told by Longfellow.

One proud mother, we may be sure, showed her bright-eyed boy, Peregrine White.

And so the fun went on. In the daytime, the young men ran races, played games, and had a shooting match. Every night the Indians sang and danced for their friends, and to make things still more lively they gave every now and then a shrill war-whoop that made the woods echo in the still night air.

The Indians had already learned to love and fear Captain Miles Standish. Some of them called him “Boiling Water” because he was easily made angry. Others called him “Captain Shrimp,” on account of his small size.

Every morning the shrewd captain put on his armor and paraded his little company of a dozen or more soldiers; and when he fired off the cannon on Burial Hill the Indians must have felt that the English were men of might thus to harness up thunder and lightning.

During this week of fun and frolic it was a wonder if young Jack Billington did not play some prank on the Indians. He was the boy who fired off his father’s gun one day, close to a keg of gunpowder, in the crowded cabin of the Mayflower.

The third day came. Massasoit had been well treated, and no doubt would have liked to stay longer, but he had said he could stay only three days. So the pipe of peace was silently passed around.

Then, taking their presents of glass beads and trinkets, the Indian king and his warriors said farewell to their English friends and began their long tramp through the woods to their wigwams on Mount Hope Bay.

On the last day of this Thanksgiving party, the Pilgrims had a service of prayer and praise. Elder Brewster preached the first Thanksgiving sermon. After thanking God for all his goodness, he did not forget the many loved ones sleeping on the hillside.

He spoke of noble John Carver, the first governor, who had died of worry and overwork.

Nor was Rose Standish forgotten, the lovely young wife of Captain Miles Standish, whose death was caused by cold and lack of good food.

And then there was gentle Dorothy, wife of Governor Bradford, who had fallen overboard from the Mayflower in Provincetown harbor while her husband was coasting along the bleak shore in search of a place for a home.

The first Thanksgiving took place nearly three hundred years ago. Since that time, almost without interruption, Thanksgiving has been kept by the people of New England as the great family festival of the year. At this time children and grandchildren return to the old home, the long table is spread, and brothers and sisters, separated often by many miles, again sit side by side.

To-day Thanksgiving is observed in nearly all the states of the Union, a season of sweet and blessed memories.