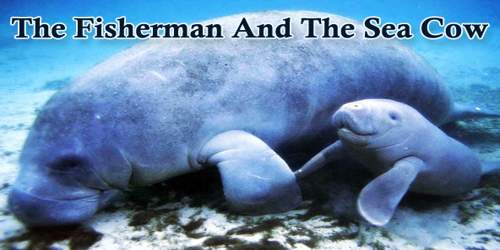 The Fisherman And The Sea Cow

Once upon a time a fisherman and his wife lived peacefully and simply upon an island. One day a stranger from the mainland happened by in his boat. Seeing the quaint cottage, the stranger waved to shore. “What a beautiful spot this is,” the man called. “Would you mind if I came ashore?” The fisherman and his wife were pleased to welcome the stranger, and they invited him to eat with them. It was a simple meal of salted fish, seaweed salad and a loaf of the wife’s homemade bread.

“Might I have a glass of milk?” the stranger asked, but the fisherman just laughed. “We have no milk here,” he said. “Will water do?”

“Of course,” the stranger said, but the fisherman’s wife flushed with shame. She had never before thought they might need milk, but after the stranger said farewell, she could think of nothing else.

“If only we had a cow,” she said to her husband. “If we had a cow, we could drink milk. We could butter our bread. We could feast on cream. Oh, if only…”

“No sense thinking about what we don’t have,” the fisherman said. “We have so much. Besides, if we had a cow, she would have nothing to eat.” Little grass grew on the rocky island. “Stop your silly dreaming, woman.”

The woman tried, but that very night she dreamed of pails of foaming milk, of bread lathered with butter, of berries covered in cream. These dreams haunted her at night and taunted her during the day. “I must have a cow,” she wept to her husband.

The fisherman teased his wife for her foolish dreams. After a while, she grew sullen and sad, until one night she suddenly remembered the stories of her childhood, stories her mother had told her of the sea cows that the Sea King owned in his wondrous kingdom. As she thought about these stories, the songs and chants she had learned as a child came back to her. Half asleep, she slid quietly out of her bed and went down to the shore.

She climbed into her husband’s fishing boat and rowed out to sea. There, beneath the bright moonlight, she leaned over the boat’s edge and began to sing the songs her mother had long ago taught her. “King of the Sea,” she sang, “all things belong to thee. A thousand sea cows do you own, won’t you send one sea cow home?” As she sang, she rowed farther and farther out to sea.

The next morning the fisherman, as usual, walked down to the shore, and there he saw to his amazement a magnificent cow calmly grazing on the seaweed. He rubbed his eyes. “My wife’s dreams have made me see things,” he said, but he looked again and the cow was still there. He ran back to the house.

“Come look!” he called to his wife, and he grabbed her hand and ran with her to the shore. Sure enough, there was the cow, still peacefully grazing. The wife, too, was astonished, and she was also delighted. “I asked the Sea King for a cow,” she confessed to her husband. “Surely he has chosen to reward us for our goodness.”

The fisherman was pleased, but now that his wife had tasted cream and cheese and butter, she dreamed bigger dreams. “How good it would be to have more than one cow,” she said to her husband. “Think of all the butter and cream we could have.” That very night she once again rowed quietly out to sea and sang her song to the Sea King. “Sea King of the waters, hear my words, send to me a sea cow herd.”

The next morning, a whole herd of sea cows grazed upon the shore, and soon the fisherman and his wife were producing more milk and butter and cheese than they could possibly use. They began to carry these by boat to the mainland, and there they sold crates of cheese and boxes of butter.

The fisherman and his wife became prosperous. The wife no longer was satisfied with their tiny hut, and so she begged her husband for a larger house, and then one still larger. As their fortune grew, so did her desires. She became proud and temperamental, and the fisherman began to long for the old days. One night as his wife was fretting over some new thing she wished to own, he turned on her.

“Nothing is as good as it once was,” he said. “I’ve lost the wife I loved, and in her place is an angry, greedy, selfish woman. I beg you, do something.”

Listening to him, the woman realized how changed she had become, and she also began to dream of the old days when she and her husband were happy, and their life was simple and sweet.

That night she went down to the boat. Quickly she rowed out to sea, and with tears streaming down her face, she sang again. “Sea King, hear another song from me, dear king, now that I own sea cows, I own everything. Sea King, hear my song and hear this plea: Take these things away from me.”

The very next morning, when the fisherman and his wife awoke, they were once again asleep in their old, tiny hut, and all the sea cows and the milk, cheese, butter and cream were gone. After that they lived happily again, enjoying their simple, peaceful pleasures.